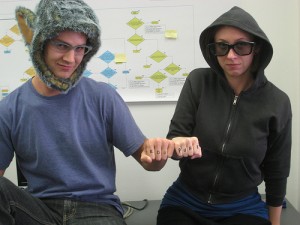 I recently read an interesting article on building collaborative office spaces. Its main argument was based on research from late 1940s, when scientists discovered that “friendships are likely to develop on the basis of brief and passive contacts made going to and from home or walking about the neighborhood.” But what about online collaboration and friendships?

Online friendships from 1980s to the present

I can definitely tell from experience that friendships do form online. I suppose I am of the generation with the widest experience on this, as I am old (or young, whichever way you feel) enough to have been online already before the internet was common.

Back in 1980s and 1990s, bulletin board systems (BBS) were the hot thing. For me they were, anyway. A BBS was a social network that you connected to from your computer by dialing the BBS server over a phone line using a modem. As long-distance calls were expensive, there were loads and loads of local BBSes with different communities, and in these communities, friendships grew. As the communities were fairly local, many BBSes arranged face-to-face meets for their users. Now, one might argue that friendships grew in these face-to-face meets, but I can tell that when I went to such a meet for the first time, I immediately felt that I was with friends – and this was at a time when all online communication was text, I had never seen a picture of anyone there before!

Online friendships have also been formed in online games, especially massively multiplayer online role-playing games (MMORPGs), since the late 1990s. I have played both team-based competitive FPS games and MMORPGs, and formed friendships in both. I personally know people who have started dating after becoming friends in a game, and have heard of people who have got married, even.

Online friendships are also being formed on social networking sites, especially Twitter. Twitter has introduced me to some awesome people because of its open nature and ability to connect through mutual interests. This side of Twitter is very well described in Mark Schaefer’s book, The Tao of Twitter, which I highly recommend as a brief introduction to what Twitter can be.

So, what does this talk about friendships formed online have to do with more effective enterprise collaboration? Everything.

Online collaboration and serendipity in the enterprise

In today’s virtual world, the activity stream is the water cooler. While doing your regular work, you can see all sorts of things happening in the company, people working on all sorts of issues, and discussing things you may know about either from your current job, hobbies, or some past job. You may realize that you have something valuable to contribute to something no one knew to ask you about. An insightful comment, a problem solved, and bang, we are in the middle of productive collaboration and serendipity.

This is the power of social intranet, of unplanned collaboration that has been the target of open office spaces.

The problem is, how do you get there? Set up a social intranet platform and tell people to mingle? No. In order to get there, the social intranet, if it can even be called that, has to be at the heart of work. Work needs to be done there, things need to be completed there, it cannot be an extra patch on top of non-transparent workflows. If you want people to collaborate on work issues, bring work to a platform where collaboration is possible.

One of the most important things to consider when building this platform is creating a human face for it. While it is possible to create friendships with just text, it is a lot more effective with pictures included. All consumer social networking sites have realized this: they all show you the face of the person who wrote the comment. It is a lot faster to form connections to people when you see a picture of their face than it is to connect to a piece of text on the screen. This is why in many of the wiki applications I have built, I have included the page creator’s profile picture on the page template instead of just their name.

Can the generation gap be overcome?

Now, all of this comes very naturally to me, as I am of the first generation to be born to a world of home computers, but I have to acknowledge that it does not come naturally to a large part of today’s workforce. It is a new paradigm, and it is always difficult to accomplish a paradigm shift.

The best way to make people overcome their doubts is to show the benefits, for example through pilot projects. I have seen engineers in their 50s and managers in their 60s become enthusiasts for online social collaboration. I have also seen younger people think it is the most stupid thing ever, even though younger people are in general more receptive to online social collaboration.

Collaboration can be built without a common physical space