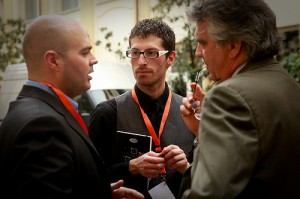 In their influential paper, Evolving to a New Dominant Logic for Marketing, Stephen Vargo and Robert Lusch (2004) argued for a shift from goods-dominant logic to a new, service-dominant logic, according to which service provision is the basis of all economic exchange.

In their subsequent papers, Vargo and Lusch have repeatedly written about the importance of information technology. Although Vargo and Lusch do not spell it out directly, it seems that social media in particular is required both as a technology and as a methodology in order to effectively utilize service-dominant logic. In this post, I will elaborate on why social media is so important for any enterprise that strives to become service-dominant.

Social media provides functionality that is critical to service-dominant logic

The key value of social media is scale. While it is possible for a company to focus on the needs of an individual local customer, it is not immediately obvious how to repeat this feat in a global environment with many customers located around the world. Now, enter social media: conversations of millions of people available instantly and in a searchable and filterable format.

Paying attention to what people are saying just became possible, and in a radical way. Suddenly, it is possible to see trends in discussions that take place far apart (such as problems with a certain product or feature), instantly recognize frequently asked questions and answer them for multiple people at the same time, and receive insights from conversations in your field that would have went completely unnoticed just a while ago. Engaging with customers worldwide just reached a whole new level. This interaction, collaboration, and co-creation are the very core of service-dominant logic.

Why is service-dominant logic such a hot topic right now? Why is it edging out the prevalent goods-dominant logic that was so successful for a long period of time? Social media may be the key to answering this question.

Through social media, it is possible to genuinely co-create value proposals with reasonable effort and thus improve customer satisfaction without completely destroying any chance of success because of a steep price tag. One example that comes to mind is Dell’s Linux laptop, which entered production because of online demand. Dell was able to adjust its value proposal based on customer collaboration through social media and co-create a successful product. Without social media, Dell would not have been able to gather the information needed to launch the product, and the customers would have had to settle for inferior value proposals.

In order to understand just how deeply social media is integrated into service-dominant logic, it is worth quoting a couple of paragraphs from Vargo’s and Lusch’s original paper.

Vargo and Lusch (2004, p.13) foresaw a change in market communications from one-way communication to dialogue:

Historically, most communication with the market can be characterized as one-way, mass communication that flows from the offering firm to the market or to segments of markets. A service-centered view of exchange suggests that individual customers increasingly specialize and turn to their domesticated market relationships for services outside of their own competences. Therefore, promotion will need to become a communication process characterized by dialogue, asking and answering questions.

Vargo and Lusch (2004, p.14) also elaborated on how the entire organization builds relationships with customers:

Relationship building with customers becomes intrinsic not only to marketing but also to the enterprise as a whole. All employees are identified as service providers, with the ultimate goal of satisfying the customer.

In 2004, social media was taking its first fledgling steps and was by no means a formidable force. However, Vargo and Lusch did not need to know about it in order to recognize that certain communication patterns were vital for their thought model.

As a matter of fact, at times it seems that Vargo and Lusch consider advances in information technology only as technological, and not methodological as well. For examples of this, see Service, value networks and learning, in which Stephen Vargo, Robert Lusch, and Mohan Tanniru (2010, pp. 22 – 23) discuss the significance of information technology.

In some papers, Vargo and Lusch manage to observe the key benefits that social media can provide, even though they do not mention it by name.

Not only could the increased connections and collaborations be with employees and suppliers but also with customers. Because of this increased collaboration, the innovation that is unleashed could be unprecedented. … The ﬁnal force that has created an inﬂection point in the movement toward collaboration is network ubiquity. Increasingly, everyone and everything is connected to each other and each thing. Network ubiquity accelerates the consequences of open standards, specialization, and connectivity. The consequences are higher collaboration and more innovation.

There are three key features in the above quotes that are only available through the use of social media:

Conversation is held with the entire market. Even a local company only hears what its customers choose to tell directly, or some altered form of what they have said elsewhere through hearsay. Social media enables the company to interact with the entire market and participate in many of the conversations it has not been able to hear before. For a global company, also this change is even more drastic.

All employees build relations and take part in the conversation. The company’s face is not a PR department or marketing department. It is all individuals who are part of the company. While this has always been true, social media increases the importance of this statement: the employees who participate visibly in social media have much more influence than before. This does not mean that everyone should become active in Twitter or other such networks, although some social tools will almost certainly be used by all employees in service-dominant companies, it just means that those who are active in such networks influence the company brand in an unprecedented way.

The role of the marketing department in service-dominant logic

It is not obvious that there has to be a separate marketing entity in a service-dominant company, because interactions with customers and the market are more prevalent throughout the organization. However, it is likely that such a department still has its place.

[M]arketers should focus on hearing the voice of the market and the signals that arise from the market. In this regard, more and more people that are not part of a direct economic exchange are voicing their views about the economic exchanges of global entities – for instance, the voicing of views about the practices of firms or their suppliers in employing child labor or the marketing practices that spread global brands that influence local cultures. The service-dominant logic enterprise will not only listen to all of these voices, but will also participate in the conversations.

In A Stakeholder-Unifying, Cocreation Philosophy for Marketing, Robert Lusch and Frederick Webster Jr (2011, p.132) envision the future of marketing:

The emerging third era of marketing requires that marketing must have clear organizational linkages to facilitate two-way information flow with all stakeholders. These organizational contacts would include operations (employees and customers), procurement (supplier partners), R&D (technology partners), human resources (employees and management), investor relations (shareholders), accounting and finance (shareholders, banks and other debt providers, and regulators), distribution management (resellers and user-customers), and field sales management. Marketing must be more than demand stimulation; it must also be a general management responsibility.

Intention and capability to offer value of a particular kind in a particular way is communicated to potential buyers and resource-provider partners with a value proposition, an invitation to participate in the process of co-creating value that is superior to competitor offerings … It is a marketing responsibility to assure that the firm’s value proposition is communicated to, and understood by, the entire network of resource-providing stakeholders.

All of the above quotes paint a similar picture: instead of pushing a message out, marketing enters into dialogue with all stakeholders, from customers and prospects to internal employees, listens to them, and talks to them.

Marketing also has the crucial task of managing the information flow in order to connect the right people, help keep everyone up-to-date, and help in getting the message through.

Finally, it is worth noting that Dr Graham Hill has approached the same issue from the opposite end in his post Social CRM at a crossroads: Where to next?

These distinct concepts, developed roughly at the same time, are in practice dependent on each other and rely on each other in order to reach their full potential.

I find this idea intriguing. What do you think?