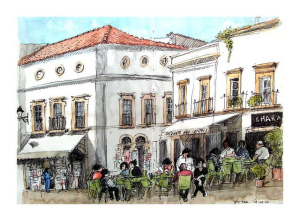 A change in marketing logic is underway. The perception that markets are a place where goods are exchanged for money is being replaced with a more nuanced view of service as the fundamental basis of exchange and value as subjective, consisting of multiple dimensions, and realized only through use.

Why is this shift taking place? Has the world changed? Or has our understanding of the world improved? Why didn’t we think of this before?

In his recent book, FinancialServiceLogic: In the Revolution of Exchange in Banking and Insurance, Pekka Puustinen explains the shift based on a cultural shift from a modern to a postmodern society: the increasing importance of self-expression, self-power, and pursuit of individuality are truly creating more heterogeneous customer base. Furthermore, as Generation Z has grown up in a world of social media and the internet, they demand more individual and meaningful service than the previous generations.

However, despite the interim period of standardization and mass production, the origins of which can be traced back to the factory system of production in the late 19th century and the work of Frederick Winslow Taylor in the early years of the 20th century, service that creates value far beyond the product has existed before.

Just consider the work of any artisan profession, whether it’s a cobbler, a tailor, or a blacksmith, or consider a local butcher, a local village store, or even a local diner. All of these already provided service that went far beyond the exchange of goods and money, and the providers had a very good idea of who their customers were as human beings, not just as customers. Human beings, by the way, have always been a heterogeneous group – perhaps not as obviously as they are today, but each individual has always been unique.

So, if we already had service for human beings, why did we lose it? The answer lies in the very same dimensions of value that are now being brought forth as part of the new logic. The four dimensions of value – economic, functional, emotional, and symbolic – form a whole. Standardization and mass production offered major gains in economic and functional value at the cost of emotional and symbolic value, gains so large that these higher levels in the value hierarchy were rendered small in comparison.

Interestingly, this change has never affected those who are extremely wealthy. They have always been able to go after emotional and symbolic value, whether in the form of experiences or items that symbolize their status.

The significance of technological progress

In his book, Puustinen mentions multiple aspects of our technological progress that are making individual service possible such as the mobile revolution, social media, and data analytics and big data. These are all making it easier, but they are not a precondition to offering emotional or symbolic value.

In an interesting detail, Puustinen uses Harley-Davidson as an example of symbolic value. He writes: “A Harley-Davidson Motorcycle, a Harley, is not the best motorcycle in the world when it comes to its technical characteristics, and its price-quality ratio is a bit so and so. But people buy Harleys for example because they provide their owners an admission to a family of the like-minded, the Harley Owners Group.” (emphasis added)

This is an insightful example, all the more so as Harley-Davidson’s turnaround in the early 1980s is such a well-known business story. You see, Harley-Davidson almost went bankrupt and saw their domestic market share fall from over 80% to below 5% by the early 1980s. Harley-Davidson was failing, because it competed on economic value, and it was being outdone by its Japanese competitors. In order to turn the company around, the leadership decided to make Harley-Davidson more customer-focused, and indeed, its trademark events were created during its resurgence: Harley Owners Group (HOG) rides and demo rides, in which many Harley-Davidson employees participate and are in direct contact with their customers.

Did Harley-Davidson use the mobile revolution, social media, or big data in the early 1980s? No, they did not. Such things did not exist.

Would Harley-Davidson have been able to re-increase its market share without an effective production process? No, the cost of a Harley would have been prohibitively high in comparison to the competition.

Thus, technological progress is not a precondition to service-dominant logic, but rather a convenient tool that makes applying it even easier. (In this, I have changed my point of view from what it was four years ago, when I wrote about the benefits of social media for service-dominant logic.)

I must emphasize that this is not merely a matter of technological progress, even though such progress definitely helps, but also a result of our deeper understanding of the nature of effective production and how to run effective mass customization as well.

The disruption brought about by the rapid increase of economic value and functional value has calmed down, and emotional value and symbolic value can again become major factors. This is what necessitates the shift in logic to a service-dominant approach.