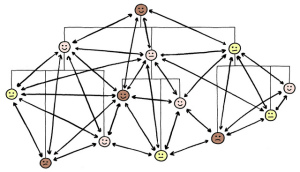 The world is changing at an ever increasing pace. This is the mantra that we are relentlessly exposed to, and there is a fair bit of data to back up that claim as well, so clearly there are some challenges for businesses that need to be met.

One of the latest attempts to address these challenges comes from John Kotter, famous for his 8-step process for leading change, who has adapted his change leadership process into a more agile version that he calls the “dual operating system” of the firm in his book Accelerate: Building Strategic Agility for a Faster-Moving World.

In this post, I will look into what the dual operating system is all about and how it compares to other paradigms that also attempt to meet the same challenges.

A brief look at the competition for enterprise agility

The dynamic capabilities framework explains why these are strategic challenges, and expands the scope of strategy to be much more fluid and, well, dynamic. However, the framework does not give an answer as to how a company should go about building these capabilities.

Luckily (?), there is no lack of competition for our attention when it comes to models that claim to build the needed agility for us. Whether it’s Lean, Lean Startup, Social Business, Six simple rules for managing complexity, or Lean Social Business, models are plentiful. All of the mentioned models have been discussed on this blog before, by the way.

In this post, I will examine yet another candidate, the dual operating system.

According to Kotter, the traditional operating system of the firm, the hierarchy, is an excellent model – for the purpose it was originally built for, efficiency and reliability. However, the hierarchy fails when it would also need to be fast and agile.

This does not mean that the hierarchy is a failure as an operating system. Rather than replace the hierarchy with something else, Kotter proposes to complement it with another, parallel operating system, the network. Actually, Kotter claims that companies naturally start out as networks, and then turn into hierarchies as they grow up, with an intermediate state where both operating systems exist in parallel. It is by perpetuating or recreating this usually temporary situation that we can achieve the benefits of both efficiency and agility.

The network is a system that operates without traditional command-and-control. People volunteer to be part of the network in addition to their position in the hierarchy (so no external consultants here), and their position in the hierarchy bears no effect on their status in the network. The network side of the operating system then pursues strategically important initiatives independently, based on what the volunteers want to dedicate their time on.

Building this parallel operating system is necessary, because without it there is no way to build a sufficient number of change agents to achieve the needed level of agility and because sufficient passion can only be built based on a system of volunteerism, not based on being told to do something. Losing some of the control is the price of gaining agility.

The way this does not spin completely out of control is alignment of the two operating systems based on a number of principles and a set of processes for the network.

The dual operating system is based on a set of five principles:

The actual setting up of the network and its operations follow a modified version of Kotter’s 8-step process (he calls these 8 processes “accelerators”):

According to Kotter, when the dual operating system is formed based on these principles and processes, it is possible to align the network with the hierarchy and achieve rapid change in the desired direction without complete control over what changes exactly take place. As each initiative is based on volunteers, only issues people feel strongly about get worked on.

Crucially, all models for increasing enterprise agility rely on empowering individuals in order to achieve the goal. This seems to be an inevitable conclusion, if we accept the premise that many people, rather than few, need to use their minds for a company to be agile.

In Lean, everyone at a company is an innovator. In the more traditional models, people innovate around their own work, or at most around the value stream in which they participate, but not really around other parts of the company’s operations. After all, who knows more about any particular task than the people who are doing it? One big strength of Lean is that every team leader is an active coach and sparring partner to all of his team members, and thus innovative work practices are institutionalized (this is sometimes called improvement kata and coaching kata).

Lean Startup takes the innovation and improvement framework from Lean and applies it to product development under extreme uncertainty. It creates an extremely agile team that pursues available opportunities and is able to radically pivot when it senses market needs. In practice, Lean Startup in the enterprise is based on project teams or semi-independent units that can respond to the needs of their designated customers. When examined from the dynamic capabilities point of view, Lean Startup enables the enterprise to better sense and seize opportunities, but it is difficult to transform the entire enterprise based on Lean Startup alone.

Yves Morieux’s six simple rules constitute another management-guided path to employee empowerment. The rules are designed to increase the total quantity of power within the enterprise and promote the autonomy of and cooperation between people. Yet, they do so in a carefully crafted way, in which changes are planned, not emergent. They can create agility in daily operations, but creating strategic agility within this framework is more difficult.

Social business, on the other hand, relies on a more radical distribution of power, and self-organized collaboration. It is much less planned in detail than designed to be emergent. The big question is, does this approach compromise on efficiency and reliability too much in order to achieve agility? If you’re supremely agile, but also incredibly wasteful, can you be successful?

Lean Social Business attempts to strike a bargain between Lean and Social Business, and it is with this approach that Kotter’s dual operating system is best compared with: the dual operating system attempts to strike a bargain between traditional management (the hierarchy) and social business (the network). It does so by instituting the guiding coalition and a loose process of 8 accelerators to align the advances made by the network with the hierarchy that remains intact.

Note that Kotter does not mention social business, nor the use of social collaboration tools, but the first three principles he outlines could just as well be from any book on social business. This is not surprising – after all, all models for enterprise agility dwell on the question how to empower employees, so the pieces to the puzzle are in many ways limited and it’s the combinations that vary.

Can you have your cake and eat it? (hierarchy and network)

One prominent line of criticism directed at the dual operating system is where the time comes from to keep the hierarchy intact and add in additional volunteer duties on top. Kotter’s response is that it is not a problem. Because the system is based on volunteerism, people are willing to do both all their duties in the hierarchy and the network development duties on top.

I find this response deeply unsatisfactory. In many European countries, where the working hours are carefully monitored by law, it may even be illegal. You simply cannot have people working more hours without overtime compensation, except for senior management, and as the whole point of the network is to engage people from all levels of the organization, this is a troublesome situation.

Do we really need the hierarchy, or the network?

Any model for enterprise agility is an attempt to answer to the operating environment of the firm. In the best cases, it is a proactive effort that can even bring about the change in the environment (that is why some companies are called pioneers), but usually it is a reaction to changes in the environment.

The various models offer a spectrum of agility and control levels. In general, it is easy to trade control for agility, and there are situations where companies need extreme control or extreme agility. However, in most cases today, companies need both, and they also need efficiency (traditionally associated with control, but logically independent of it).

This is where the real demand is: demand for models that can strike a bargain between efficiency, control, and agility that gives a larger net sum of them than the regular trade-off curve.

Kotter’s basic claim is that the hierarchy is an indispensable component in this balancing act that enables efficiency in daily operations. The validity of this claim is uncertain. Especially as we move away from the assembly line and toward more creative work (and work in general, even in factories, is becoming more creative), it is not obvious that efficiency is strictly connected to the hierarchy.

Kotter further claims that the hierarchy cannot lead many of the change initiatives effectively. He does not, however, consider an intermediate model where a change initiative is lead as a traditional project, but includes open elements that encourage people from anywhere in the organization to participate. This type of mixed model is at the heart of Lean Social Business.

However, Kotter’s model leaves too many questions unanswered, questions that have significant importance. For example, traditional management and Lean are both models of hierarchy. Yet, they are extremely different from each other. While Kotter is more explicit in how he would organize the network, there are many questions left as to how the hierarchy should be organized. And even when it comes to the network, the way Kotter wants to organize it is not the only possible way.

Just like dynamic capabilities, sensing, seizing, and transforming, are the basic components of enterprise agility, the hierarchy and the network are the basic components on how to organize in order to build this agility. Underneath these main concepts, however, there is a wealth of possible models, and much room for innovation. Kotter’s specific model is one option, but there are many others. His major contribution is to provide conceptual clarity on how to think about this organization, which can be used as a springboard to develop new models still.

Image: Network and hierarchy by Jurgen Appelo @ Flickr (CC) (I am aware that the original context of this image is not exactly the same as the way Kotter uses the terms – it is visually useful nonetheless)