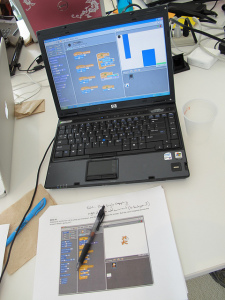 Teaching children computing is all the hype nowadays. The forerunners, such as the UK and Estonia, have already started, with other countries, such as Finland and South Korea, not far behind.

The public discussion in Finland has mainly focused on how children will be taught coding. However, this is a fundamental misunderstanding on what this future subject is about according to its most vehement proponents.

In this post, I will examine what exactly we want to teach children via computing, and whether teaching computing is a good way to accomplish this goal.

Hadi Partovi, one of the founders of code.org (a nonprofit dedicated to growing computer science education in the US and worldwide), gave a nice TEDx talk on the subject. In his talk, he emphasizes that what we really want to teach children are logic, problem solving, and creativity.

A major part of computational thinking is modeling. Chris Granger has raised modeling to the forefront in his post on Why coding is not the new literacy. According to him, modeling consists of four distinct processes:

Computational thinking has been called “a new and fundamental way of thinking and problem solving” and even ”the skill of the 21st century.”

And then we take a journey back to Francis Bacon

While its proponents make computational thinking sound like something completely new and unprecedented, this description seems unwarranted. All the main aspects of computational thinking are already part of the core methods of scientific method, which date back at least as far as Francis Bacon and the 16th century.

Computational thinking does not work because that is the way computers work – it works because that is the way to model the world in science, regardless of the existence of computers. The scientific method predates computational thinking by centuries. In fact, reducing the scientific method to terms that computers use now may even amount to dumbing it down (an argument not far from what Steve Eastbrook presents in his paper From Computational Thinking to Systems Thinking).

The real question for education is why do people think computational thinking is so ground-breaking? Why is computer science seen as the main way to teach logic, and why does its vocabulary dominate the discussion on the scientific method even though the scientific method has had a vocabulary of its own for centuries already? The explanation is that school has so far failed to adequately teach the scientific method. Software engineers, on the other hand, are forced to transform their thinking into machine-readable form, and therefore they are the most numerous group of people using logical constructs and thus the group of people whose vocabulary is most often present.

A short story on critical thinking and logic

A short story on critical thinking and logic might illustrate the importance and difficulties related to the subject.

You see, Finland is completely obsessed with capability testing. When you apply for a job, you will more often than not need to participate in a day or two of testing, and a prospering consultancy industry has generated around this market.

One of the test subjects when applying to leadership positions is called critical thinking. What it amounts to is simply determining whether some statements are logically true and whether some conclusions follow from the presented premises. Therefore, at least the testing industry sees this capability as an important one.

I took this kind of test recently as part of an outplacement program (yeah, we’re restructuring), and scored the highest score ever in tests conducted by that particular agency. It was really easy. Why? Because I’m a philosophy major and the test was full of things we used to practice in logic classes at the university (thanks to Elina Packalén, my logic teacher back in 1999).

However, thinking back to my times as a student, students in general felt that logic was really hard. I loved it, so it didn’t feel like that much work, but many university students struggled with logic a lot. If you have received a good basis on the scientific method in school that should not be the case at the university. Clearly, teaching the scientific method and logic in a way that motivates the majority of people is a challenge.

Integrated teaching as the solution

Unlike the UK, Finland is not introducing computing as a separate subject. Instead, computing will be taught as part of math and in a minor role as part of crafts. I think we may be on to something here.

I have written earlier about the importance of teaching children the scientific method via the PDSA cycle. This is almost exactly the same as what people who want computing to be taught at school are after. We’re back to the remark of Hadi Partovi, what we really want to teach children are logic, problem solving, and creativity. It’s just that computing is not the first step in teaching these, the scientific method is.

The scientific method is also universal, it applies in biology, geography, physics, everything. Incidentally, all of these also take advantage of computing nowadays.

Conrad Wolfram held a great TED talk in 2010 on the deficiencies of our math teaching. According to him, we are mostly stuck in calculation by hand, which is not a very useful skill nowadays with computers doing all the calculating (he does point out that calculating mentally, including estimating the rough answers to difficult calculations mentally – not by hand – remains an important skill). What he suggests is that we should take full advantage of computers in studying more complex math and solve real issues like we would in real life, not simplified versions of issues that are easy enough to calculate by hand (real-world math often is not).

This points us in a clear direction. Teaching computing from the first grade is not ideal; teaching the scientific method is. From there we can progress to using computers as a tool for examining and solving more difficult problems in all subjects with the scientific method as our guideline. This should also help motivate students, because solving actual issues instead of simplifications makes the skills needed much more tangible. One key benefit of computing is thus increased motivation.

The main obstacle we face in implementing this is that designing integrated lessons is difficult. How can we achieve a holistic view where the problem-solving methods in all subjects reinforce each other, instead of the subjects being designed in isolation? The biggest challenge lies not with the children, but with the educators who need to achieve a holistic understanding of the curriculum both in order to design the lessons and to teach them.