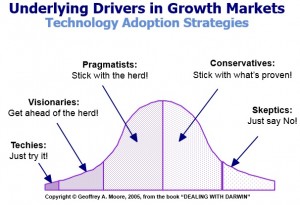 Change management is hard. As a general rule, change adoption rarely, if ever, happens overnight by simply adding a new process or technology and holding a few training sessions.

In a recent blog post (in Finnish only, sorry), Marko Suomi argued that people in organizations in general act according to the technology adoption lifecycle: some are very enthusiastic about new changes whereas others are much slower to adopt them. It is important to note that the enthusiasm of individuals varies between changes too: even a person who is generally an innovator usually does not adopt all changes first.

In this post, I wish to delve a bit deeper into how changes are adopted in organizations and what the management can do about it.

In Geoffrey Moore’s version of the technology adoption lifecycle, the five groups are named in a somewhat more down-to-earth manner:

According to the technology adoption lifecycle, the distribution of these responses in a population follow the normal distribution. However, for any individual company, this might not hold true!

The most obvious deviations from the norm appear in small companies. Think of a visionary startup where the people involved have come together precisely because they want to venture into the unknown and try out new things. Contrast this with a (stereotypical) government agency, where all change is considered bad by default.

Most companies probably fall somewhere in between (and the normal distribution applies), but is this a necessity? Is it inevitable that as a company grows, it will exhibit a clear spectrum of all approaches to change?

My claim is that while it is reasonable to work with an assumption that the normal distribution holds true if you do not know the company, it is not inevitable that approaches to change are normally distributed nor should the management of the company remain satisfied if they are.

Perhaps the most obvious way to change the distribution is to do so through recruitment: if you recruit innovative people, surely the company will become more innovative as a result?

However, even this road is not an easy one to travel. If the company lacks a culture of improvement, the innovative people will become frustrated and either stop trying or leave. Furthermore, it is unlikely that you will be in a position where you can recruit so many people at once that the culture change can take place through recruitment, and even if you do, you might not be able to control it and the new culture may end up being undesirable as well.

Thus, the only viable path that is available is to work through changing your corporate culture. A good starting point for most organizations is John Kotter’s 8-step process for leading change.

If your organization is extremely reluctant to change (the number of conservatives and skeptics considerably higher than usually), you might even need to start from more basic things: getting the management to go where the work is done, discover minor annoyances that hinder people in their daily work, and remove those obstacles at an increasing pace to convince people that changes are possible before venturing on a major change program.

Kotter’s 8-step process has been around for a while, and it provides a good starting point for culture change, but companies still often struggle with it.

In brief, the 8-step process is as follows:

The 8-step process is a good starting point for a company that is struggling or attempting a major change of direction. However, while it is a good tool to have in your change leadership toolkit for certain situations, it is not a pleasant loop to be caught in applying and reapplying the process, creating a new sense of urgency all over, and going through a major change ever so often. Would it be possible to create a company culture where it is not needed all that often?

Once the company is becoming more ready to change, the approach can be institutionalized and built into the core DNA of the company through the application of the improvement kata and coaching kata.

Mike Rother has written rather extensively about these tools (a brief introduction is available here), the goal of which is to make improvement a daily habit.

In brief, improvement kata is a pattern that constantly improves work through iteration:

Coaching kata, on the other hand, is systematic coaching and reflection on the improvements, generally practiced by team managers throughout the organization. This is a key aspect: coaching needs to take place all over the organization in order to create the new corporate culture, it cannot be injected into the company only from a small team of experts.

This continuous improvement is the key to a change-oriented corporate culture: when changes are constant, people become more used to them, and less resistant to adopt change.

For example, Toyota considered their culture such an important aspect of their operations that they sent a large number of Japanese sensei to coach the employees of their fledgling US subsidiary upon founding. Only when they were fully satisfied that the Toyota way had been ingrained in the minds of their US employees did they consider their US subsidiary ready to stand on its own.

There are tools you can use to lead change even in the most stubborn organizations, but it will take a lot of time to turn a ship around. Luckily, most failing organizations are not on the verge of collapse and can indeed be turned around successfully.

From that point on, it will still not be smooth sailing until the end of time, but rather the next challenge is to create a culture of improvement within the company to make future changes easier. If something should be apparent by now, it is that change is inevitable, and companies should prepare accordingly.