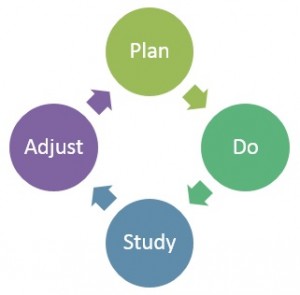 What are the skills we need nowadays? Have they changed from what was needed before? The Assessment and Teaching of 21st Century Skills research program, headquartered at the University of Melbourne, strives to provide answers to these questions.

They have identified multiple skills that are crucial to life in the 21st century, and one of particular interest is what they call collaborative problem-solving (CPS), which comprises both social and cognitive processing skills. This social nature of problem-solving is the aspect that is considered to be new.

However, if we take a deeper look at the applications of the PDSA cycle, we can easily notice how problem-solving has been social already before, and that these existing methods may also have more to contribute to the class room.

A brief remark on 21st century skills in general

The term, 21st century skills, is actually quite misleading. The ATC21S research program readily admits that some of these skills were relevant already when Plato was a young boy, but they are now needed in new combinations and their application has changed somewhat because of technology. The ATC21S research program also runs a MOOC on Coursera if you’re interested in learning more of their approach.

Coming from a different approach, Heidi Hayes Jacobs has actually proposed that we rename the 21st century skills the right now skills, because we are already well on our way through the 21st century, so this is not science fiction.

The discussion on 21st century skills tends to focus on technology, but upon deeper inspection the changes in our society may be even more fundamental to changing the skills needed. In case of collaborative problem-solving, it is easy to see how it is more important the more socially mobile the society is and the less hierarchical organizations are: if people are mere cogs in a machine that should do as they are told, problem-solving is not in high demand, but if they are active actors, it becomes crucial. Thus, it is not just a matter of technology – quite the contrary, most 21st century skills would be important even if computers did not exist.

As detailed in the ATC21S professional development module 2, the OECD’s PISA studies have already adopted the view that collaborative problem-solving is important, and uses a framework for observing the steps in in:

The ATC21S program, in turn, sees problem-solving as a series of steps leading towards hypothesis testing and collaborative testing of ideas:

Note on terminology: I prefer the expression Plan-do-study-adjust (PDSA) over Plan-do-check-act (PDCA), because it more fluently expresses the content of each phase.

The Plan-do-study-adjust (PDSA) cycle is a tool used in continuous improvement, and also forms the basis of the ISO 9001 quality standard, which is in use in more than 1.1 million organizations. The PDSA cycle has wide applications from solving specific problems to launching strategic improvement projects. It is a fairly easy tool to use, but it has some deep implications, namely, always going for the root causes and correcting them instead of being satisfied with superficial changes.

The phases of the PDSA cycle are (adapted from Sobek & Smalley, Understanding A3 Thinking: A Critical Component of Toyota’s PDCA Management System):

4. Adjust (accept your results or restart the cycle to refine your approach)

Putting these three approaches together

Putting the above approaches together is somewhat challenging, as they use different language, and even describe different parts of the problem-solving process.

The most comprehensive one is the PDSA approach, so I will map the other unto it.

The OECD PISA approach closely resembles the PDSA cycle, so it is a relatively easy match: understanding the problem and creating a plan fall under the plan phase, execution falls under the do phase, and monitoring and reformulating consists of two phases, study and adjust. What is missing from the OECD PISA approach is root cause identification and future state visualization. It would be useful to make these explicit, as they are often needed, at least implicitly, in order to carry out the action.

The ATC21S approach is more difficult to match to the others. The first two steps in it seem to be about grasping the current situation, and all the rest about identifying the root cause. Under this interpretation, the ATC21S approach does not get anywhere near solving the actual problem!

On the other hand, if we read the description so that the end result is a solved problem, that means that in the ATC21S framework, the do phase includes also gathering the evidence needed for root cause identification. In the other frameworks, there are activities related to gathering data in the plan phase, but in the ATC21S framework, nothing of the sort takes place. Instead, the planning phase consists of only some theorizing and creating a number of scenarios for testing. While this might work for simplified problems in a class room, it would be a disastrous process for complex problems in actual work environments.

What’s worse, the simple if-then framework of the ATC21S completely ignores variation. Variation can be taken into account under this framework, but at face value, it guides to only take into account simple and straightforward causation, which, unfortunately, is usually at an unattainable level in actual work. (This is not to say that such causation does not exist, but if it does, we cannot make sufficient observations to get rid of variation.)

5 whys is the simplest problem-solving technique used in PDSA.

The actual activity in the 5 whys technique is simply to keep asking “Why?” until the root cause is found. The actual number of questions is not limited, although the name of the technique is meant to encourage the investigator to ask at least five times in order to dig deep enough. While this method has some weaknesses (can the investigator ask the right questions; how does he know when to stop asking; only one root cause can be found) it is nonetheless a powerful troubleshooting tool, especially when used in conjunction with going out to where the work takes place to see for yourself and asking the questions from multiple people involved with the process.

If more a more robust approach is needed, 5 whys can also be used in conjunction with fishbone diagrams (Ishikawa diagrams) to depict a more complex scenario with multiple root causes. 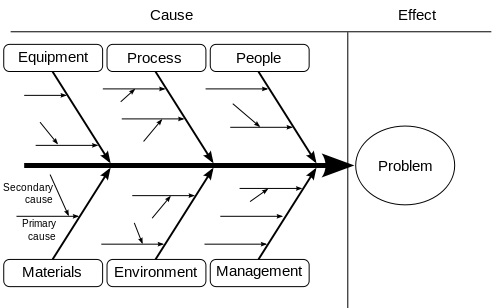 Control charts – common cause and special cause variation 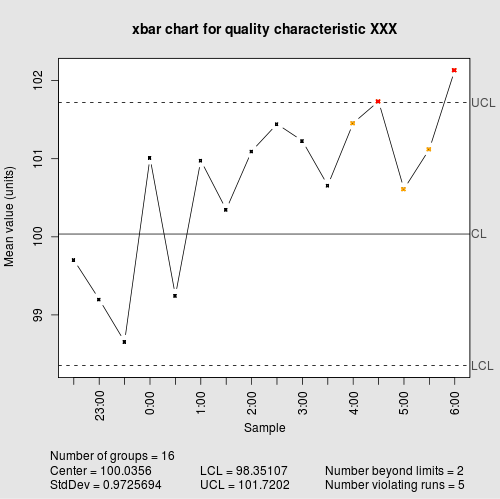 Control charts are used to plot the results of a process on a time series. Crucially, they include the expected range of results as top and bottom horizontal lines based on the observed variation in the process.

This is important in order to understand that variation is inherent in most operations, and making changes when the process is behaving at the expected level is unlikely to be useful. In fact, Deming was infinitely fond of demonstrating to people how adjustments on a process that was within its common variation always produced results that went further and further away from the mean, the ideal state.

The seven basic tools of quality

Ishikawa diagrams and control charts are two of the seven basic tools of quality, known for their easy application with relatively little theoretical training. The other five tools are also worthy of taking a look.

At this point of our journey, we are ready to draw some conclusions.

First, solving problems in a collaborative way is not new. It has been practiced in a very structured way as a part of the PDSA cycle for decades.

Second, the PDSA cycle remains a crucially important tool in our problem-solving tool box. The PDSA cycle and the related tools are simple, easy to teach and learn, and highly effective. This makes them extremely appealing to teach as core 21st century skills.

Third, if we really want to teach children effective problem-solving, we have had all the necessary means for decades. The PDSA cycle, five whys, Ishikawa diagrams, control charts, understanding of sufficient and necessary conditions, and understanding of common cause and special cause variation can all be taught in elementary schools, and yet most adults today do not grasp their use or importance. That is a very tangible challenge for 21st century education.