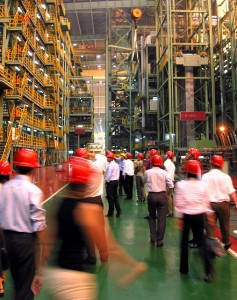 While still taking fledgling steps, reshoring seems to be bringing manufacturing and related jobs back to the USA. However, the phenomenon does not seem to be taking place in the rest of the developed world. This raises the question, why does it happen in the US? What is the difference? In this post, I will seek answers to these questions.

Productivity is increasing, but so is demand

However, the overall market has been growing, especially with the return of Asia: according to statistics gathered by Angus Maddison, 57% of the world’s GDP was from Asia in 1820, from which it dropped to below 20% in the mid-1900s and has since returned to more than 40% in the early 2000s.

So which one is growing faster, productivity or demand? Globally, the number of jobs in manufacturing increased in the early 2000s, at least until the recession hit in 2008. Europe remained fairly steady and China was doing great (although there has been quite a lot of debate on what happened there in the 1990s). The country that struggled the most was the US. 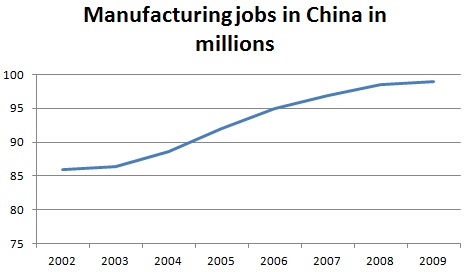 Share of the global market: China wins, Japan and the USA lose

ETLA in Finland recently examined the development of manufacturing globally, and their report includes details on how various parts of the manufacturing market share have developed between 2000 and 2011 (sorry, the report is only available in Finnish). 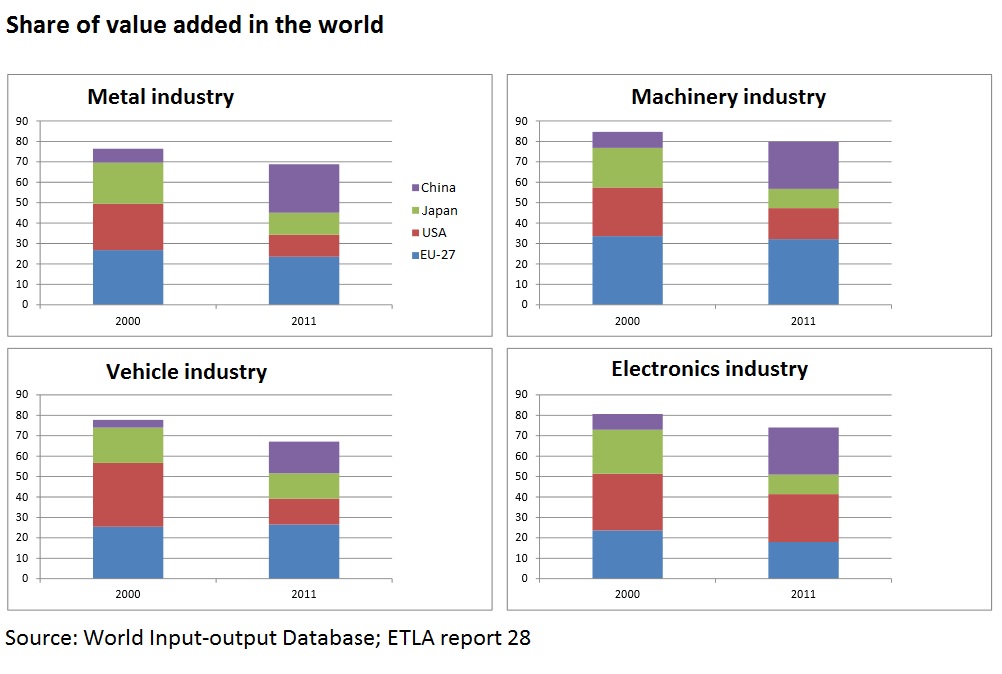 These figures indicate that USA and Japan have lost a lot of market share in the 2000s, while China has been a big winner and Europe has remained fairly steady. Remember that the overall size of the market has grown significantly, so loss of market share does not mean a fall in net production. Electronics has been the sector where manufacturing has most clearly moved to developing countries across the board.

When looking at exchange rates, Euro has grown a lot stronger in the 2000s, gaining 51% against the US dollar, 44% against the Japanese Yen, and 11% against the Chinese Yuan. Yen has been fluctuating the most compared to these other currencies, having weakened the most during 2013-14. 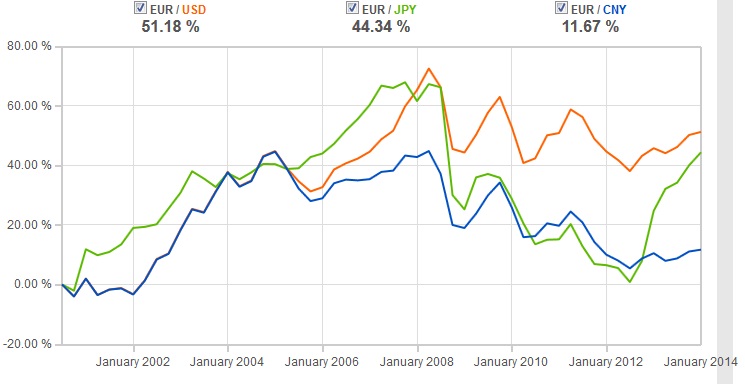 Thus, Europe has been able to maintain a strong manufacturing market share despite its strong currency that weakens its competitiveness. Japan and the USA should currently benefit from their weakened currencies that reduce the cost of their products in foreign markets.

After the recession, the number of manufacturing jobs has not recovered to pre-2008 levels anywhere in the developed world. There are differences on whether there is any recovery going on though: Japan and numerous European countries are still losing jobs, whereas the USA has already recovered hundreds of thousands of jobs (with more than a million still to go to reach pre-2008 levels) and some European countries, such as Germany, are also starting to recover. 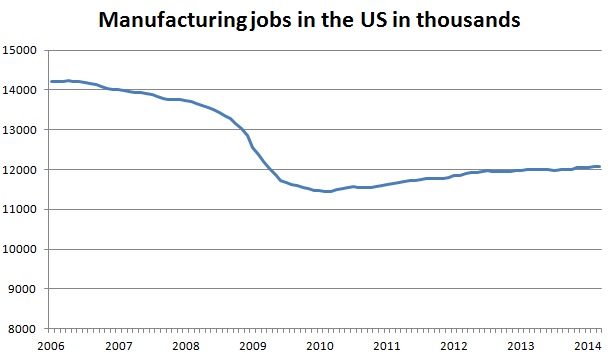 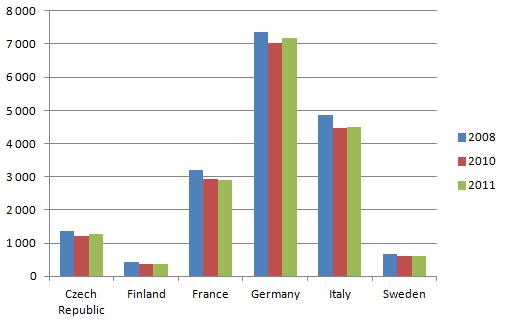 Another vantage point to the whole picture is one taken by McKinsey in their report on next-shoring. According to McKinsey, the future locations for manufacturing are determined by two things: proximity to demand and proximity to innovation, depending on the particular field. Manufacturing will be a global activity with multiple hubs around the world satisfying local needs on some products, and innovative centers pursuing new endeavors on some products.

From this point of view, all the stars are aligned for manufacturing to return to the US: it is a huge market, and also one that has been the most aggressive in pursuing offshoring. Therefore, from a next-shoring perspective, there is nowhere near enough manufacturing in the USA to satisfy the demand for goods in that market area, and a significant increase in manufacturing is needed to achieve balance.

When it comes to proximity to innovation, things are less clear-cut, although there is obviously huge potential for innovation in the US, so it is likely to succeed in that aspect as well.

Europe is in a much more challenging position than the US. The Euro is currently very strong, and the energy prices are also on the rise with Germany having decided to shut down all nuclear power plants by 2022.

The challenge for Europe is that if proximity to demand is a major factor in where manufacturing takes place in the future, the European Union is currently a major exporter – there is more manufacturing there than needed for the local market.

Therefore, Europe’s only hope is to keep such sectors of manufacturing that benefit from innovation and are resistant to increasing transportation costs. One of Europe’s main strengths at the moment is machine building, and it seems to be possible to remain competitive in this sector in the future as well. Germany’s move toward renewable energy can even turn out to be a great move in the long term, if it creates a strong renewable energy innovation cluster in Europe.

When looking at Japan, we see yet another combination of factors:

This last point is the significant difference: transportation costs, travel costs, time difference – everything is much easier to manage between Japan and China than, say, the USA and China. Indeed, Japanese manufacturers have strong ties to subcontractors in Eastern Asia, and their supply chains in the area are more functional than those of the more remote countries.

Japan has a good opportunity in that as the demand in China increases, Japan can supply goods to this market easily from a proximity point of view. The challenge is that while waiting for Chinese income levels to rise, Japanese manufacturers have to find some market for their goods.

What does all of this mean for China? As the labor costs in China increase, it is already losing some manufacturing to even cheaper nearby countries. On the other hand, the potential domestic demand is huge, so there is a possibility to make up for all that lost manufacturing by replacing it with new manufacturing, for which there is demand.

Another interesting aspect is proximity to innovation. Innovation is not what China has been expected to provide in the past few hundred years (things used to be very different a long, long time ago), but thanks to all the offshoring that has enabled China to build a strong industrial machine, there is little doubt that innovation will find its place in the Chinese portfolio as well: because manufacturing is vital for supporting engineering, having now learned much about manufacturing, China is in a great position to finalize its curriculum in engineering as well.

This line of thought is a little intimidating from a European point of view such as mine: we are not inexpensive, we do not have the biggest market to support, but at least we are innovative and that is our strength. However, now that China was given a chance to build up strong manufacturing capability, a strong innovation capability is sure to follow. The innovation race is just beginning.

What does it all mean?

Reshoring and offshoring are both individual acts, decisions taken by individual companies at specific points of time. Neither is a complete trend, and neither has explanatory power on where manufacturing will take place in the future. The balance between the two is bound to change over time as new decisions are made in new circumstances.

Next-shoring, on the other hand, is a hypothesis on the basis on which manufacturing locations are decided. Looking at the past data, it seems obvious that reshoring to the USA will be taking place for some time, and it seems equally unlikely for Europe and Japan to benefit from significant reshoring activities.

When taking a more long-term view, reshoring to the USA as a significant phenomenon will stop at some point (there will always be individual instances of both reshoring and offshoring). The race for future manufacturing will then be decided based on market size (largely not changeable) and on innovation capabilities. When it comes to innovation, the USA is in a good position, although it has its own risks because it has weakened its manufacturing base more than any other country, and another side of that coin is the fact that China is now a significant manufacturing power and will be in a surprisingly good position in the innovation race thanks to its manufacturing capabilities. Both Europe and Japan have their own strengths as well. The future is not set in stone, and, actually, that is a good thing.