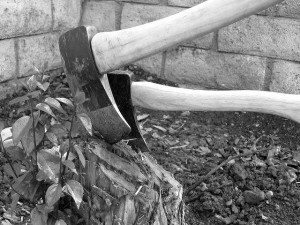 Porter’s five forces analysis can be used to examine the state of an industry and the relative strengths of the different roles in it. 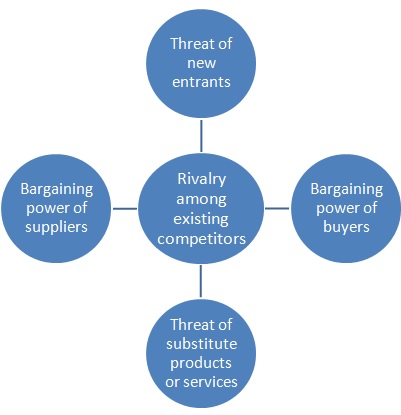 Rivalry among existing competitors. The more companies operate within the industry, the more competitive it is.

Threat of new entrants. The easier it is to enter an industry, the more difficult is the competitive position of the incumbent companies. Barriers to entry can include legislation and licenses, but also investments that would become sunk, such as industry-specific R&D or production facilities.

Bargaining power of suppliers. The greater the relative power of the suppliers over the companies in the industry, the more difficult the industry is. One of the most difficult situations is when a supplier is a monopoly, the only provider of a product or service.

Bargaining power of buyers. The greater the relative power of the buyers over the companies in the industry, the more difficult the industry is. One of the most difficult situations is when a buyer is a monopsony, the only buyer for a product or service.

The changes in competitive forces in the publishing industry

The publishing industry has become a much more difficult environment over the past few years.

Threat of new entrants. Publishing a book used to be a major endeavor. Well, that’s not to say that it does not take work nowadays as well, but with various easy self-publishing platforms, the barriers to entry have practically collapsed.

Threat of substitute products or services. Books compete against a myriad of forms of both entertainment and education, and while the book market has held its own rather well, this factor has also made competition more fierce.

Bargaining power of buyers. From the point of view of a major publisher, Amazon has become an increasingly powerful buyer, one that controls more than 60% of the market. Amazon has also created a powerful ebook platform, even an ecosystem, centered around its Kindle ebook reader.

The publishing industry has become more difficult in each competitive force in the past few years. That is a mind-numbing situation to be in. It is also the ultimate cause behind Amazon’s current moves.

Amazon and the power to shape an industry

Usually, a company has to understand the competitive environment it is in and adjust its operations accordingly, but in some rare cases, a single company has the power to change an industry. This is what Amazon is trying to do in its battle with Hachette.

Amazon is trying to change the book market from a publisher-retailer-customer model into a publisher-service provider-customer model. It is not about ebook prices, it is not even about profits as such, it is about a complete change of a business model.

Why is Amazon doing this with the publishing industry?

Actually, Amazon is engaged in similar negotiations elsewhere as well, as pre-order buttons for Time Warner movies briefly disappeared from the Amazon website in May 2014. They made a rather swift comeback though, leading some people to speculate that Amazon was successful in its tactics.

This is a rather crucial point for my argument, and it will be very interesting to see if any details are revealed later on. Based on industry analysis, Amazon should have failed to gain a major advantage over Time Warner. The film industry has less internal competition (no equivalent to self-publishing in a similar scale) and Amazon does not hold anywhere near the same level of market dominance in movies as it does in books, neither in electronic format (consider Netflix, Hulu, Viaplay, HBO) nor in physical format (Best Buy, Target, Walmart).

The publishing industry, however, is in an extremely weak position against Amazon. Consider this quote from a recent New York Times article:

The person involved in the Hachette negotiations wasn’t optimistic for the publishers. In previous rounds with Amazon, “We had so little leverage. It felt like I had a slingshot and they had a tank. We’d fight and fight and then we’d make concessions. They rolled over us.”

One major reason why Amazon holds this power over the publishers is its ecosystem around ebooks, with Kindle apps available on a variety of platforms, Amazon using its own proprietary format for ebooks, and all ebooks purchased from Amazon being available to the customer at any time and from anywhere thanks to its cloud service. These features introduce switching costs to customers that lock them in the Amazon ecosystem.

What is the impact of the ebook market? Recent reports indicate that the ebook market in the USA is no longer growing at a rapid pace. The market share of ebooks in adult trade sales was 27% in 2013, with an increase in overall revenue of a mere 3.8 percent. Meanwhile, the UK market still grew by 20% in 2013, reaching a market share of 14 percent of the overall book market. It is noteworthy that the US figures do not include self-publishing, while the UK figures do, and the growth there has been in large part because of self-publishing. Therefore, the overall growth of the ebook market in the USA could be higher, if the self-publishing trend is similar to the UK. There do not seem to be any fully reliable figures on Amazon’s share of the ebook market, but generally it is placed somewhere between 60 and 70 percent. While still not the majority of the market, it is an important piece.

Why is Amazon doing this now?

This is the best window of opportunity for Amazon to attempt to change the terms of the industry.

The big publishers attempted to switch the business model to an agency model (one where the publisher sets the price, and the retailer gets a set cut) from the wholesale model (where the retailer pays the publisher a wholesale price and then sets its own sales price to whatever it wants) in 2012, which caused a Department of Justice lawsuit for price-fixing, which all the publishers settled. The settlement, which forced them to accept retailer discounts, is about to expire this year, opening up the opportunity for new negotiations.

Amazon is anticipating the potential move to an agency model by repositioning itself in the industry. If it can succeed in positioning itself as a service provider for the publishers, it will get a bigger share of the profits. This would also apply if the book industry moves to a subscription model.

What would the world according to Amazon look like?

It is not just about pricing. Amazon has also been attempting to move to a model where they could use their print-on-demand (POD) service to print books to customers, should the publisher not have one in stock (in both US and the UK). They have also pushed for Most Favored Nation (MFN) clauses, which would prevent the publishers from selling the books for a lower price than Amazon’s anywhere, even on their own site.

As a slight downside, the move to print-on-demand would mean that Amazon would be perhaps the only book seller that does not need to hold an inventory of books, significantly cutting its costs compared to the competition.

On the ebook market, Amazon strives to remain the biggest player thanks to its ebook ecosystem built around Kindle.

This is all in accordance with Amazon’s purpose:

Amazon.com strives to be Earth’s most customer-centric company where people can find and discover virtually anything they want to buy online. By giving customers more of what they want – low prices, vast selection, and convenience – Amazon.com continues to grow and evolve as a world-class e-commerce platform. … Amazon’s evolution from Web site to e-commerce partner to development platform is driven by the spirit of innovation that is part of the company’s DNA. The world’s brightest technology minds come to Amazon.com to research and develop technology that improves the lives of shoppers, sellers and developers around the world.

Amazon is not in retail business. Amazon provides a service for suppliers and customers to find each other. Amazon is making this most visible in the publishing industry now, because that is where it holds the largest advantage. Whether the publisher is a big name or an individual, Amazon provides similar services and also views them as such, and want to charge for them.

Photo: A hatchet and an axe by Randy Robertson @ Flickr (CC)