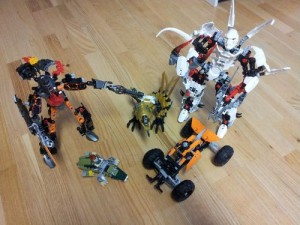 How important are various forms of innovation to a company? Gary Pisano, a professor at the Harvard Business School, recently wrote an article called In Defense of Routine Innovation on Harvard Business Review, in which he argues that the vast majority of profits come from sustaining innovation, not disruptive innovation. His examples include Intel and Microsoft, giants who have been making the majority of their profits from sustaining innovations for the past two decades.

While Pisano does point out that disruptive innovation is also needed, none of his examples really serve to bring this point home. To get a better perspective on this, it is useful to take a look at a company with a slightly longer history. The case I have in mind is Lego.

A very brief history of Lego

The Lego Group was founded by carpenter Ole Kirk Christiansen in 1934. The company started producing plastic toys in 1947, and the basic eight-stud red Lego brick was first sold in 1949. The Lego brick reached its final form and was patented in 1958. From there, the company steadily innovated around the Lego brick, introducing the Duplo product line in 1969 and minifigures in 1978.

Lego enjoyed a patient, steady growth all the way to the 1990s. Then, in 1998, it suffered its first loss-making year ever. The world had become faster-paced, video games were booming, children were growing older faster, and the old toy maker was deemed unfashionable.

In an attempt to turn the company around, Kjeld Kirk Kristiansen, the grandson of the company’s founder, appointed a turnaround specialist, Poul Plougmann, as the new CEO in October 1998. Plougmann launched a number of initiatives to achieve disruptive innovation at Lego, but ultimately was not able to achieve a successful turnaround, and was replaced in January 2004 by Jørgen Vig Knudstorp, who succeeded where Plougmann had failed.

Did Lego need disruptive innovation to save it?

In his book, Brick by Brick: How LEGO Rewrote the Rules of Innovation and Conquered the Global Toy Industry, professor David Robertson presents an account of why Plougmann failed to rescue Lego: he let innovation run rampant and uncontrolled, and while the culture at Lego became much more disruptive, too much innovation was bad for the company. Robertson’s argument is that while Lego needed disruptive innovation, the way it carried it out under Plougmann failed.

However, things do not seem nearly that clear-cut based on the data available.

Jesper Ovesen joined Lego as CFO in 2003, the final year of Plougmann’s reign. He set out to figure why the toy company was not profitable, and was horrified by the quality of the data he had at his disposal. Lego had no idea which products were profitable, because they were only monitoring results by geographic areas, not by product lines. Product line profitability was discoverable, but only through hard work that had not been pursued previously. When Ovesen completed his dive into the figures, he found out that Lego stood on three legs: Bionicle, Star Wars, and Harry Potter, and the latter two were successful only when there were new movies.

Lego was even unable to monitor the costs of individual sets. One of the most famous examples is the Lego Technic Fiber Optic Multi Set from 1996, the pieces of which cost more than the sales price, so any sales only resulted in more losses!

Yet another rock in the shoe were the Legoland parks, of which only the original Legoland Billund was profitable. Nonetheless, Lego was continuously opening new amusement parks, causing even further losses. (Legoland parks were sold by Knudstorp in 2005. It is worth noting, however, that the parks are nowadays very successful, with 36% EBITDA in 2013, up from 31% in 2008, and from 21% in 2004, when it was still owned by Lego.)

Thus, actually, the operating costs of Lego were out of control already before Plougmann started as CEO, and that had little to do with innovation. In fact, all of the profitable product lines in 2004 were introduced during Plougmann’s reign, and the most important one of those, Bionicle, which single-handedly saved Lego from bankruptcy in 2004, was launched in 2001 and completely developed during Plougmann’s era.

But could Plougmann have taken a completely different approach? It is obvious that his failure to pay attention to costs and product line profitability nearly toppled Lego, but would it have been possible not to engage in disruptive innovation at all but instead only focus on operations and sustained innovation around the Lego brick?

That is a difficult question to answer. It is completely possible, given that stalwarts such as Lego City, Duplo, and Lego Castle were turned into profitable products later on. Also the Legoland parks are nowadays a successful venture. Thus, a turnaround without disruption seems a possibility.

However, one of the goals set for Plougmann was to grow Lego significantly. Even if Lego could have become a successful niche company without disruptive innovation, how could it have become a giant without disruption? A look into the results Lego is reaping now may prove fruitful in forming an opinion on this.

Major new ventures at Lego in the past two decades

Some of the major milestones in recent Lego history include:

The journey into digital (1995). Lego recognized the need to look into the digital experience in the 1990s, and in 1995 conducted a study on how to move into this new space. As a result of that project, the Lego Darwin project was launched in 1995, with the goal of digitally modeling all Lego bricks. This eventually lead to Lego video games (from 1997, with licensed IPs from 2001), which became highly successful, and Legos attempts to break into the MMO space with Lego Universe in 2010-2012 (which failed), and again with Lego Minifigures Online in 2014. Another development was the Lego Digital Designer in 2003, with the associated Lego Design byME mass customization program (2005-2012) that enabled individual consumers to design their own Lego sets and order them from the factory.

The adult fans of Lego and robotics (1998). Lego introduced its first programmable robot toy, Lego Mindstorms, in 1998. The set was a success and appealed to children and adults alike.

Licensed intellectual property (IP) (1999). In 1996, Peter Eio, Lego’s chief of operations in Americas, had become concerned that the toy market in the USA had become increasingly dominated by licensed products, and Lego had none. He began a search for suitable partners, and found one in Lucasfilm, whose new Star Wars movies would come out in a couple of years, and the license was up for grabs. It was more work for him to convince Lego management than Lucasfilm, but eventually the deal was signed and Lego Star Wars products hit the shelves in 1999, followed by a plethora of other licensed products.

Integrated experience: toys, developing storyline (TV shows/movies, books), and accessories (2001). The big innovation product line was Bionicle (2001-2010), which expanded well beyond toys thanks to its developing storyline and licensed products to create a whole ecosystem. Bionicle also introduced the strict cadence of releasing new products every August and January. Lego has since used the same format in Ninjago, Hero Factory, Friends, and Legends of Chima.

Buildable board games (2009). The Lego Games product line (2009-2013) brought Lego into the board games market. However, despite early successes, the line did not achieve profitability targets and was discontinued in 2013.

Products focused on girls market (1992, 2012). Lego has finally found a way to reach girls as customers with its Lego Friends product line (2012-present). However, it has attempted this several times before, with the closest predecessor to Friends being Lego Paradisa, which was in production from 1992 to 1997.

While exact figures are not available, the major areas from which Lego is reaping profits nowadays are its own IPs that provide a full integrated experience, and its licensed IPs (the four best-selling product lines in 2012 were City, Star Wars, Ninjago, and Friends). These ways of doing business entered the world of Lego in 2001 and 1999.

Therefore, while Lego perhaps could have become profitable on sustaining innovation alone, the major innovations from its less cost-effective era have played a major part in its growth. Furthermore, not much happened between the minifigures of 1978 and the wake-up call Lego had in 1995. Likewise, there are no new major innovations beside the new sales channels of Lego Architecture product line that have been introduced after the Poul Plougmann era.

Lego has underwent a period of stabilization, focus on operations, and fine-tuning its ways to build sustaining innovation around well-established design and business model principles. If history were to serve as a guide, it could very well live on this sustaining innovation for years to come, just as it did up to the 1990s. However, in doing so it would run the risk of falling to the same trap it did in the 1990s.

The pursuit of innovation at Lego today

In Brick by Brick, professor Robertson outlines the seven “truths” of innovation that Lego pursued under Poul Plougmann:

According to Robertson, the sudden pursuit of all these goals simultaneously was the reason for Lego’s downfall. However, we have already seen that it was the lack of financial and operative control that really caused problems for Lego. Furthermore, now that Lego has stabilized its operations, it is actually pursuing these goals again!

Master of sustaining innovation, but what about disruptive innovation?

This journey through the difficult times Lego experienced brings us back to professor Pisano’s argument that the vast majority of profits come from sustaining innovation, not disruptive innovation. Lego was very good at sustaining innovation for decades in the 20th century, and it has shown that it is even better at it now since 2004. In its line of business, this is a must, as more than 60% of Lego’s sales are from new launches every year.

However, the turmoil Lego experienced in the 1990s vividly shows how sustaining innovation alone may not be enough in the long term. This is also something Lego realizes, as it has attempted to restart its disruptive innovation engine for years now, but it still has not been able to find the disruptive creativity it was able to display in the years at the turn of the century. And this brings us back to the innovator’s dilemma: now that Lego is lead by sound management practices, how can it combine them with disruptive creativity? So far it does not seem to have found the way.