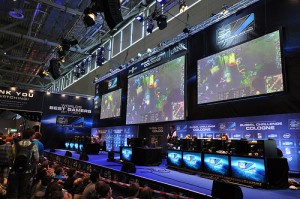 In his presentation at Manufacturing Performance Days in June this year, Professor Marco Taisch argued that the issue begins already from the way science is taught and appreciated in elementary school. If that is the case, then the needed changes are quite fundamental. However, problem-solving often consists of both short-term and long-term solutions, and in this post I am more concerned in more short-term solutions, namely, how to reach teenagers and college students and change their view of manufacturing. Can eSports offer a venue to changing their opinions?

What is eSports: size, games, and sponsorship

Electronic sports (eSports) means competitive playing of video games. In 2012, the total prize money of all eSports reached almost 10 million US dollars, and eSports teams and players are also widely sponsored with many players earning a regular salary on top of any prizes won. OK, that is not quite football, but it is already on professional level here and there.

The most mature eSports scene is the Starcraft 2 competition in South Korea, where fully professional teams sponsored by major corporations from many industries (Samsung, CJ Corporation, SK Telecom, KT, Woongjin, STX) compete in a team league. It is also one of the only places where the manufacturing industry is represented through sponsorship, as the main sponsor of the team STX SouL is STX, a major company in the shipbuilding industry.

In recent years, professional gaming has improved its foothold in Europe and the USA as well with Major League Gaming (MLG) in the USA as the leading event organizer. Furthermore, the USA began issuing athlete visas for League of Legends players this year, recognizing them as professional athletes.

Sponsorship and advertising in the West has mainly been carried out by technology companies that target gamers as customers (such as ASUS, Steelseries, Razer, Kingston, and Intel) or other companies with products that target gamers as customers (energy drinks, soft drinks, antiperspirants, and fast food – yeah, I suppose there’s a bit of a stereotype there).

eSports viewership and why manufacturing industry should care

So, what does this have to do with the manufacturing industry? Remember, the target is to reach teenagers and college students, so we need some information on viewership.

And this is where some impressive numbers come to play:

Based on these figures, eSports offers a fairly unique medium for reaching young people, especially males. They also indicate that this probably is not the path to getting more women into manufacturing, at least not just yet, but you can’t fix everything in one go.

One small sidenote on the viewers: as many of them are likely gamers themselves, this could also be a boon for recruitment, because recent studies indicate that gamers become good at making rapid decisions, a skill that is useful in both management and on the assembly line – what else does a Lean production line require but rapid decision-making? Do I pull the andon cord? How do we fix this issue now to get the line moving again? Of course, in order to benefit from these skills, they need further education to give them skills related to manufacturing. Still, this demographic seems to be an interesting one.

How to go about sponsoring eSports

As this sponsorship would be focused on attracting future workforce, it is not something that individual companies are likely to do, although some might. Manufacturing industry organizations, on the other hand, should care a great deal about securing workforce for their member companies in the future.

The ideal sponsorship or advertisement thus seems to take the form of improving manufacturing brand image. Here are a couple of examples on how one could go about this (probably not good enough for actual use, as they are quite hastily invented, but feel free to use them if you like):

If you happen to be in South Korea, getting visibility is a costly endeavor, as the eSports scene there is really big. The scene in the USA is also quite mature by now. On the other hand, maturity does not mean only an increased cost level, but also an increased level of professionalism, which is very good for sponsors.

Outside these two countries, the cost of getting visibility in eSports is lower, but finding suitable partners is also much more difficult. You would not want to sponsor a team that disbands three weeks after signing the agreement, now would you?

This is actually a fairly serious obstacle, because it is unlikely for manufacturing industry organizations to know the local eSports scene very well or to start investigating it sufficiently to build such understanding. However, the eSports organizations (teams, leagues, events) could take an active role here and market themselves based on the facts I have written here. It is by no means a certain success, but skills gap is a major concern among manufacturing companies and organizations, so there is demand for improving the brand of manufacturing in young demographics. Again, it takes professionalism to present the case.

As I am from Finland, I can say a few words about the local scene here. Overall, it is quite immature and amateurish (including the operations of the local eSports organization), although there have been some better examples: there is a long tradition of event organizing in Finland (in good part thanks to Assembly) and there have been a couple of attempts at forming a professional team environment, first in eXelon Gaming (2009-2012), and now in ENCE eSports, which has been founded by some of the most senior influencers in Finnish eSports and is our current best hope for developing a serious competitive team environment in this small country.

Overall, there are definitely obstacles in the way of manufacturing industry looking into eSports as an important influence, but it seems to me that there are also some good reasons to look into it that have so far not been noticed. What do you think?