I like Lean. It is a great idea on how to get the whole enterprise on the same boat and working together in a systematic, near-scientific manner. However, at times I wonder whether Lean is keeping up with the times (which is why I am working on refining my ideas on Lean social business), and one worrying symptom is that Lean thinkers at large have not embraced social media. This is rather surprising for an ideology that encourages large-scale participation, although a certain amount of technological skepticism and being more of a tortoise than a hare are common features in Lean and can explain this to an extent.

In this post, I will examine the state of Lean thinking on social media at the moment.

The Lean Enterprise Institute is pretty much the only Lean voice on Google+, and the most widely visible Lean voice overall. It also hosts multiple Lean blogs: Michael Ballé’s Gemba Coach, John Shook’s eLetters, and the multi-author Lean Post, which also happens to be one of the only Lean blogs where sharing and subscribing is easy, see the pictures below: 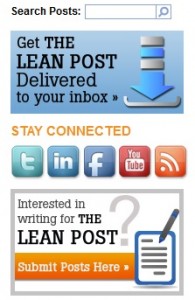 Outside the Lean Enterprise Institute, most Lean discussion on social networking sites takes place in Twitter. However, the number there are not too impressive.

A number of Lean thinkers reach an audience of more than 1000 people, including Jamie Flinchbaugh, Tim McMahon, Karen Wilhelm, and Karen Martin.

However, this list of names should already reveal something. Where are the really big names? No offense to the people mentioned, I have read some of their writings on blogs and bought a couple of books as well, but I would hesitate to call them the biggest names on Lean.

Perhaps the person I’d consider the biggest Lean name that I have found on social media is Michel Baudin (Amazon, Twitter), who has mere 760 followers on Twitter.

Where are people like James P. Womack, Daniel T. Jones, John Shook, Jeffrey Liker, Art Smalley, Mike Rother, Masaaki Imai, Drew Locher, and Greg Lane? I could continue this list, but this should be enough. All of these are people whose writings I’ve read, who have written multiple highly regarded books on Lean, and who are nowhere to be found on social media.

Lean thinkers do marginally better with blogging than with social networking sites. I already mentioned the blogs hosted by the Lean Enterprise Institute, and in addition to them there are a number of other Lean blogs.

I subscribe to around 20 Lean blogs at the moment, which actually is not that much compared to the number of blogs on social media or marketing. Many Lean blogs have been around for several years, and unfortunately many also look like that as well, and even finding a way to subscribe to the posts can be difficult. Then again, maybe RSS is old-fashioned anyway, but for authors who are not on any social networking sites, there is not much of an option, now is there.

The hottest Lean blog at the moment is The Lean Edge, which describes itself as a dialogue between business leaders and lean authors. Questions are posted periodically on the site, and then the contributors can answer them in the form of blog posts. More than 40 Lean thinkers contribute to this platform, including many people who are also otherwise on social media and many of the authors I mentioned who are not.

Other than The Lean Edge, some of my favorite Lean blogs include:

By the way, of the blogs mentioned above, only Mark Graban has set up Google authorship, which displays the author more prominently when a page comes up in Google search. More information on Google authorship is available in Scott Buehler’s blog post. While this is perhaps a small thing, it too is indicative of how state-of-the-art (or not) Lean thinkers are when it comes to social.

The cost of missing out on social media

I am not going to imagine a doomsday scenario where the Lean movement is wholly destroyed because it has not started to use social media at a large scale. Lean can carry on without social.

However, Lean is not exactly mainstream as it is, so the ideology could use some additional exposure. From that point of view, missing out on social media does hinder Lean’s growth.

Furthermore, social networking tools are something Lean has needed for a long time. The opportunities in hearing the voice of the customer (remember, Lean is about adding customer value) and in collaborating both internally in a company and externally with partners in a decentralized enterprise are significant.

Unless Lean thinkers gain proficiency in using these new tools, they will not be able to take advantage of the opportunities presented by them within a Lean framework. Without using these tools, how can Lean be a viable alternative in the future in enterprises that are no longer co-located? This is what Lean social business design is all about: combining the power of Lean and social.

What do you think? Is Lean well-represented on social media? Should it be? Also, if you think I omitted some key people or blogs, please let me know in the comments.