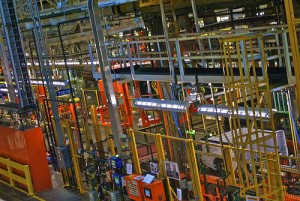 As social business matures, it is moving to new areas. People share ideas, and they also increasingly share products and services in what Jeremiah Owyang calls the collaborative economy. This sharing has mostly been consumer-centric (accommodation, cars, loans) with fairly few corporate sharing models (coworking is one). However, there is no reason why this model could not work in manufacturing as well, and as a matter of fact there are already some precursors from which a full-fledged collaborative manufacturing model can grow.

One precursor to collaborative manufacturing is Toyota. The Toyota Motor Manufacturing Texas (TMMTX) plant is one example of sharing within the supply chain. In addition to Toyota, the giant complex houses 21 suppliers in the same premises.

As a matter of fact, Toyota’s purchasing rules from 1939 are eerily reminiscent of social business: “once nominated as Toyota suppliers, they should be treated as part of Toyota (as branch plants); Toyota shall carry out business with these suppliers without switching to others, and shall make every effort to raise the performance of these suppliers.”

Toyota has lived up to these values: in 1965 they established the Purchasing Control Department that started teaching Toyota’s suppliers Total Quality Control (TQC), and in 1970 they established the Operations Management Consulting Division (OMCD) that started teaching Toyota’s suppliers the Toyota Production System (TPS). The OMCD is actually also responsible for promoting the TPS inside Toyota, so it is the very same people who teach these things to Toyota employees and to suppliers’ employees.

It is common for Toyota engineers to work with suppliers on tangible issues as well as teaching them the principles of continuous improvement.

Another precursor to collaborative manufacturing is the Competitive Sustainable Manufacturing Hotel concept developed at the Tampere University of Technology. This concept is not yet in use anywhere, although the first industry park utilizing this concept, Seaside Industry Park Rauma, is planned to be built in Rauma, Finland, for the maritime industry.

The concept also includes multiple possibilities on how such a hotel could be established:

The CSM Hotel concept is already very close to what collaborative manufacturing can be. However, it can be further enhanced, or at least made more tangible, by throwing Lean and more social business into the mix. Thus, the CSM Hotel concept can be extended with at least the following features:

Pull production and set-based packing. If multiple companies in a collaborative manufacturing facility take part in operations for the same item, the level of work-in-process can be kept low with pull scheduling. Furthermore, if companies manufacture parts for the same customer independently, the parts can be packed in sets for rapid and convenient use at the customer.

Cross-company continuous improvement. Toyota does not teach its suppliers best practices, it participates in their process development. This way, the solutions created are the best fit for that particular supplier at that point of time, and the capability of the supplier for further improvement is increased. In collaborative manufacturing, the employees of various companies can participate in the improvement initiatives of each other, thus bringing in a fresh perspective. This can be further augmented by documenting such improvement initiatives on a social collaboration platform for even wider participation and archiving for later use.

Integration with a coworking office. There are major benefits to keeping manufacturing and R&D near each other. Locating the R&D of the companies in office space within the same building both achieves this goal and, thanks to coworking, keeps the atmosphere innovative. This can be further enhanced by making the office space a real coworking space and allow in employees from companies that are not manufacturing at the location, and maybe not even involved with the manufacturing industry, in order to get even wider backgrounds present (for example, using the seats2meet model). This can also be used if there are startups that want to create prototypes: rent them some of the coworking space to have them nearby when prototypes are manufactured.

Cross-company innovation. In addition to coworking, social collaboration platforms can be used to innovate together and collaboratively improve each others’ innovations.

Sharing of employees. This type of collaborative manufacturing environment is one of the places where companies could even share employees (and not just from support functions, but, for example, at times when one company has downtime and other needs more hands) without disengaging them from the company. As the companies are in deep co-operation anyway, employee sharing would not include the risks it usually does.

This form of collaborative economy is not focused on sharing with consumers, but on sharing with partners and suppliers. As manufacturing often builds parts from which consumer products are assembled, this is a logical extension of the collaborative economy paradigm into areas where the consumers are not that involved. Their presence extends to manufacturing through their input on the final product.