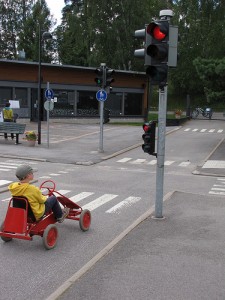 A children’s traffic park is a park where children ride pedal-powered cars on roads and operate according to traffic laws. I have been to quite a few such parks, but it was my recent visit to one in Pori that really opened my eyes to the vices of batch production.

The wastes of batch production

All other traffic parks I’ve been to have operated on single-piece flow: children are admitted to rides continuously for a set period of time each, and then called off the park when their time is up. The number of cars and the length of the ride time vary between the parks, but there are hardly any queues in any of them.

From Lean theory we know that by adjusting the number of cars (workstations) and the length of the ride (cycle time) so that they are aligned with customer demand (takt time), we are in a good position to achieve flow.

The traffic park in Pori has chosen a different approach. They admit a batch of children into the park every half an hour, and the ride time of the entire batch ends at the same time, before the next batch. The queue is handled via tickets that can be picked up at the park for specific ride times. The two times I visited the park, the first available tickets were for the fifth and the third ride time from the time of my visit.

OK, so maybe we have a capacity issue here? There are not enough cars or the ride time is too long? Let’s take a look at what really happens in the gemba, and we will quickly see that neither adding more cars nor shortening the ride time would solve the problem.

Because the operators have to handle the whole batch of children at the same time, it takes a significant amount of time to get all the children in the cars for a simultaneous start and getting them all back to the starting point at the end of the ride time. I did not time it exactly (shame on me), but a quick glance at the watch showed that the setup time (previous batch out, new batch in) took around 15 minutes.

So, we have a theoretical maximum ride time of 30 minutes, but 50% of that is spent on setup! Now it is easy to see that adding more cars would not help (even more setup), nor would shortening the ride time. The ride times in other parks are usually around 10-15 minutes, but the actual ride time in Pori is already in this area, there is just a whole lot of waste to go with it.

One solution would be to start reducing the setup time for the batch, but that would still leave one big issue: operator utilization. With the current setup time, the operators have nothing to do for 50% of the time. The benefits of single-piece flow are becoming quite clear.

Because batch production has significant setup time and still the operators have nothing to do half of the time, this traffic park is a clear candidate for moving to single-piece flow: even if the time the operators spend on setup is increased overall, the time each child waits is reduced.

By removing the batches and beginning to admit children to ride one-by-one as they arrive, the queues could be all but eliminated. The effective ride time could be set to the 15 minutes it currently is, but as each car finishes independently of the others, the next child is on the road much faster as it does not take 15 minutes to set up a single car.

In some parks, the operators keep track of time and call children in with a megaphone when their ride time is over. This works reasonably well, although it is sometimes difficult to hear the call.

Some potential improvements that could be tested include:

The status quo is accepted, until it is not

While in Pori, I actually overheard one child telling his mother that he got a really early ride time. This was for the 1,5 hour queue. This is the way it is with batch production: unless we know any better, we are happy when the lead times improve by ten percent or fifteen percent. But when we become aware of all the waste, and we realize that the improvement could be even 90%, that is a life-changing experience. And that monumental switch in thinking is what Lean is about.