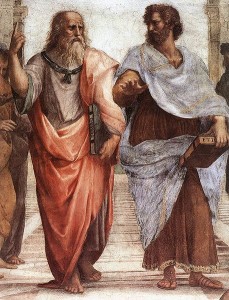 David Weinberger has recently argued for networked knowledge and claims that books are not an ideal format for thought and that, indeed, long-form thought such as books is not wide enough for deep thinking.

In this post, I will argue that much of Weinberger’s idea of networked knowledge is not particularly new and does not have the consequences he claims it to have.

In an interview, Weinberger summarizes his thoughts on knowledge as follows:

“Yet the short version of the history of knowledge goes something like: Plato defines knowledge as justified true belief. We then gradually increase the criteria of justification until knowledge has to pass a very high bar indeed. Knowledge comes to be that which we can know with certainty, what is settled and beyond reasonable dispute. … I think the Net generation is beginning to see knowledge in a way that is closer to the truth about knowledge — a truth we’ve long known but couldn’t instantiate. My generation, and the many generations before mine, have thought about knowledge as being the collected set of trusted content, typically expressed in libraries full of books. … Yet, for the coming generation, knowing looks less like capturing truths in books than engaging in never-settled networks of discussion and argument. That social activity — collaborative and contentious, often at the same time — is a more accurate reflection of our condition as imperfect social creatures trying to understand a world that is too big and too complex for even the biggest-headed expert.”

This view of the history of knowledge is inaccurate: while the starting point at Plato is correct as such, the theory of knowledge evolved heavily already hundreds of years ago. From the triad of thesis, antithesis, and synthesis of the 18th century, to Mill’s arguments in favor of freedom of thought and speech in On Liberty in the 19th century, to Popper’s view of science as falsification of theories in the 20th century, there have been many theories of knowledge that fully recognize that knowledge is ever-improving and a final understanding of the world may be unattainable.

Furthermore, even books are part of a dialogue, and have been so since the invention of writing. Even the writings of Plato are still a living part of modern-day discourse.

The merits of networked knowledge

In a video interview, Weinberger notes that long-form thought is not the only way to reach deep thought. He is certainly correct in this, and I have also previously argued that the increment of scientific thought is likely to decrease in size to a point where a peer-reviewed article is simply no longer an effective medium to publish it.

Scientific data is already being posted online outside of peer reviewed garden, and Weinberger mentions faster-than-light neutrino as one example of this.

The merits of long-form thought

Weinberger goes on to make a further claim that long-form thought is “too focused and narrow, and too careful.” This claim remains unsubstantiated. In fact, we have lots of examples of long-form thought that can hardly be described in this way.

Could a collaborative effort tweaking small bits at a time have produced Kant’s Critique of Pure Reason? Could it have produced Wittgenstein’s Philosophical Investigations?

The level of holistic understanding required in these endeavors is well-suited for long-form thought, and all but impossible to capture piecemeal. This applies to many radical ideas, which require some fleshing out by an individual author before they make enough sense to be ready for improvement through collaboration.

The shortcomings of books

Tom Johnson has written about Weinberger’s arguments against books. What are these arguments?

When writing books, you *imagine* hypothetical objections. In the network, you address real objections. This argument is more relevant the smaller a unit of information is. The wider and more holistic the argument, the more difficult it is to present in short form for critique. Furthermore, this greatly downplays our ability to determine probable counter arguments: we are actually pretty good at it, even though we are not perfect. One good example I have in mind is a technical writer who writes instructions for machinery: the European Machinery Directive requires that the manual includes information on potential misuse and how to avoid it. Turns out many writers are quite successful in writing these instructions.

With books, you have a single voice. In the network, you interact with multiple voices. Books have in fact been the vessel of discussion for a long time, and depending on the subject such long-form discussion may well continue in the future as well. Mark Baker has also argued that single-voice books can serve a useful role as recapitulation of discussion.

With books, the writer’s influence is vague. In the network, you can see the impact an author has. Ironically, many celebrated authors did not achieve notable success in their lifetime. Social proof is inconclusive. It should be the weight of the arguments, not their reception (argumentum ad populum), that determines value. For introductory books, this might not apply as much.

Books follow a perhaps artificially sequential order. In contrast, the network better models the non-linear cloud of ideas. Making sense of a mass of ideas is highly useful, whereas a cloud often is not. All sequences are artificial in the sense that there are many ways to model data. However, they are not necessarily artificial in a value-judgement sense, on which this argument relies for its strength.

Once published, books are static. In contrast, the network keeps pace with changes. In certain rapidly changing environments, this is true. However, much of what Plato and Aristotle wrote is still relevant today, thousands of years afterwards. Furthermore, long-form thought itself is not tied only to static media.

Books can have a false sense of completion, but the network keeps the discussion open. This argument seems misconstrued, as books have always been a vessel of discussion and I have never read one that would have claimed to include all the answer ever needed.

Books rely on experts to interpret facts. The network links to the raw data for interpretation. Raw data is applicable only in some cases, and even in many cases when it is available, analysis of this data requires special tools.

Books are easily misplaced and hard to find. Information on the network is a keystroke away. Well, yes, I agree that my Kindle is better than a paperback. Still, this arguments relates only to physical form, not the long-form thought used in books.

Books supposedly do well at long-form thought, but they trap writers in artificial, self-built logical constructs. Having lots of minds attacking an idea produces a sort of depth that tracing a single thread from page one to page 300, from A to Z, can’t match. Simply put, in many cases, this is not true. While in some cases crowd intelligence does work, it does not work in all cases. Bringing up Wittgenstein’s Philosophical Investigation again, it is not clear how people could necessarily have even come up with the questions, much less the answers.

So, what are books and long-form thought for?

There are still many areas where long-form thought shines:

Therefore, while the long form may not be the main tool of science nowadays, it still has its uses. The fact that we are now able to network better enhances our performance, but does not replace the long form in all cases.

Picture: Detail of The School of Athens by Raffaello Sanzio, 1509, showing Plato and Aristotle. From Wikimedia Commons.