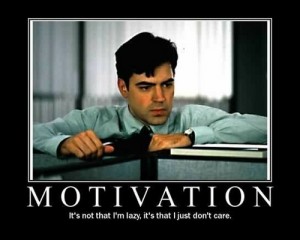 Many types of rewards and incentives are popular when companies attempt to attract people to follow them or interact with them on social media. But what about incentives when collaborative tools are used internally? It is not at all obvious whether similar reward schemes are useful in an enterprise 2.0 environment.

The surprising nature of human motivation

What I have realized when looking into human motivation is that the psychological research on human motivation has revealed a number of surprising things since the 1960s. These discoveries have started to become mainstream knowledge in the 2000s. A well-known TED talk by Daniel Pink in 2009 was perhaps one of the defining moments in making them mainstream.

Carrot and stick do not work all that well

One of the main findings has been that the traditional carrot and stick are not very effective motivational factors in the long term. Let’s take a look at a couple of examples:

In one experiment, it was tested what effects handing out rewards for drawing had on the spontaneous activity of children. It turned out that children who took part in drawing activities for which they had been promised a reward were less interested in drawing still two weeks after the event. The control groups, one in which the children just drew without any rewards as well as another where the children were rewarded afterwards as a surprise, did not undergo any noticeable change in their motivation. Extrinsic rewards, when used as contingencies, reduce intrinsic motivation!

Extrinsic rewards have also been discovered to direct focus on short-term gains and various ways to game the system to get the reward as well as limit the amount of desirable activities after getting the reward, usually stopping the activity once the reward has been received.

For further information on such studies, see this blog post by Mario Herger or read, for example, Daniel Pink’s Drive: The Surprising Truth About What Motivates Us.

The things that do work: intrinsic motivation

The only path to sustainable, long-term motivation is through intrinsic motivation. The line is not fully black and white, as some extrinsic factors may become internalized, but it usually requires at least the presence of some of the intrinsic factors as well.

Autonomy. People want to have control over their life and their own activities.

Mastery. People want to get better at what they do.

Relatedness. People want to feel connected to other people.

Purpose. People want to be part of something greater than themselves.

There is also one background assumption in this: certain basic needs have to be met, which in a work environment means that the baseline pay has to be adequate and it has to be just. In other words, comparison with other companies and with colleagues doing the same job need to match. This does not mean that everyone has to be paid the same: our feeling of fairness does allow for differences in skill, but differences have to be based on something.

I have actually not fully made up my mind when it comes to the importance baseline pay. Certain evidence seems to imply that intrinsic motivation has a significant effect even when extrinsic motivational factors are not all met. Still, they remain a potential stumbling block, and removing that variable from play makes things more simple.

Enterprise 2.0 has a lot to offer when it comes to promoting intrinsic motivation.

Autonomy. Wikis, for example, offer a great deal of autonomy to all individuals: anyone can edit anything (or most things, anyway). Ability to discuss and comment provide opportunities to develop a sense of autonomy, a sense of being able to affect things.

Mastery. Social networking also offers plenty of opportunities to both build and display mastery. Questions and answers help motivate both the people asking them and the people answering them. Evolving work instructions enable people to improve bit by bit and both show and see their improvement themselves.

Relatedness. Well, relatedness is what social networking is all about, right? From status updates to followers to collaborative workflows, Enterprise 2.0 is a superstar for building relatedness. It might not be as good as meeting in person, and cannot completely replace it, but virtual team building is finally an option. Keith Ferrazzi has recently written about collaboration within virtual teams, and social media plays an important part in it.

Purpose. Purpose is a bit trickier. Simply creating a collaboration platform does not magically create a purpose for your organization to which the employees could be attracted. Collaboration platforms can help here as well though as they can be a vital part of building an open culture in which new purposes are created together.

To sum all this up, the types of incentives and rewards commonly used in external social media initiatives in order to attract likes and followers are not effective in internal social collaboration initiatives. In order to get people involved, and, crucially, keep them involved over extended periods of time, intrinsic motivation has to play a part.

Upon comparing what Enterprise 2.0 has to offer and what intrinsic motivation consists of, it is not difficult to realize that we just might have a winner in our hands.

Building intrinsic motivation is not just a matter of tools, but also a matter of processes and culture. However, Enterprise 2.0 offers a tool set that enables companies to utilize intrinsic motivation in ways that were simply impossible to carry out before because of excessive costs or unacceptable delays. These new tools, together with a desire to build motivating processes and culture, open a whole new world of opportunities.