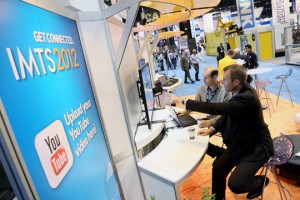 IMTS 2012 was eagerly anticipated by social media enthusiasts in the manufacturing industry. The show advanced the use of social media, but there was no leap.

Before the show: large expectations

Bernard Martin recently argued that Twitter adoption in B2B had crossed Moore’s chasm, although he did add that there is no unified B2B market, and in some areas the use is more common than in others.

In addition to Twitter, IMTS also sported a Facebook page and LinkedIn group, both with more than 1700 likes/members already before the show. Compared to the less than 1000 likes and less than 200 LinkedIn group member that EMO 2011 was able to muster (more on social media at EMO 2011), these were some impressive figures.

The activity related to the show increased as the event drew nearer, with around 200 updates in LinkedIn about IMTS in the week before the show, and 200 tweets with the #IMTS hashtag in the 24 hours before the show started.

As the doors opened, so did the floodgates at Twitter, to the extent that they did in this event. The number of tweets peaked in the first day, briefly reaching 1500 tweets in a 24-hour period. After that the activity slowed down slowly but surely with the final day seeing around 600 tweets. Over the 6 days, there were around 6000 tweets with the #IMTS hashtag.

Twitter was by far the most successful social media channel during the show. The activity in the LinkedIn group simply died, although there were 400 updates in people’s profiles regarding IMTS during the show.

The Facebook page gathered a couple of hundred more likes, and around 700 people talked about IMTS on Facebook, but most of the messages were not public.

Still, for a trade show with 100,000 attendees, a couple of thousand people tops sharing it in social media cannot be considered a whole lot.

What was great about IMTS when viewed from social media was that there was more going on than just advertising. People shared interesting articles and videos, gave advice on which presentations to attend and even where to eat.

What was less good was that the conversation did not really take off beyond the most simple replies. So, maybe the people got connected face-to-face at the show (there was at least one tweetup from what I gather) so they did not need to really discuss things over Twitter, but whatever the reason, there was not as much interaction as I had hoped for.

Only one speech was live tweeted, and that was from the opening ceremony, where an assistant of Dr. Rebecca Blank, the U.S. Secretary of Commerce, live tweeted her speech.

Exhibitors used social media to lure people to their booths (it seemed as if everyone had an iPad contest), and individual people recommended or asked some things about where to go and what to see, but the trade show was not really taken virtual, there was no way to fully participate from the outside.

I was able to find some main themes in the online space, but it is difficult to say whether they were also the main themes at the show floor. The main themes that caught my eye online were:

If you were at the show, please let me know if these were themes you also witnessed, and if there was something else as well!