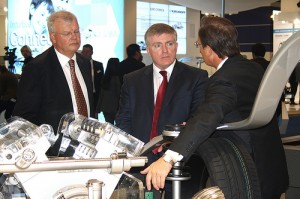 The two most important trade shows in the manufacturing industry in 2011, EMO Hannover 2011 and imX Las Vegas 2011, were held recently. In this post, I will examine how online and social media were utilized in these events that focus on a very traditional industry.

I have previously written about the importance of promoting your trade show presence online in order to maximize the gains from your investment. Manufacturing industry is highly conservative, so it is interesting to examine whether any online promotion practices are utilized in this field.

EMO is the leading international trade show for the machine tool industry. In 2011, the trade show was held in Hannover, Germany on 16-21 September, and it gathered more than 140,000 visitors and more than 2000 exhibitors.

The organizer of EMO Hannover, VDW (German Machine Tool Builders’ Association), had increased its presence online, but there were still significant gaps in the online coverage of the event. Let’s examine their efforts in detail.

EMO website. The website was comprehensive, partially localized into multiple languages, and it was also updated during the event with daily videos (one per day), and PDF versions of the daily trade show newspaper (unfortunately, not optimized for online at a whopping over 20 MB download per issue).

EMO mobile app. All exhibitors and more on your mobile phone! EMO had built a mobile-optimized site that provided access to exhibitor information, bus schedules etc. and was accessible via WLAN for free. They also had an iPhone app, which had been downloaded 3200 times by the second day of the event. However, their mobile strategy had one fatal flaw..

Trade show WLAN at 10 EUR per hour. Well, this is obviously fatal to the online presence of an international event. Perhaps it is because of lack of bandwidth to serve the huge audience, but this pricing effectively prevents the use of social media for many visitors.

EMO on social networking sites. EMO featured a good set of presence on social networking sites: Facebook page (931 likes, content in German only), LinkedIn group (140 members, content is members only), Youtube channel (practically abandoned during the event, features only an introductory video), and two Twitter accounts, one in German and one in English (both were strictly broadcasting channels).

Overall, the organizers of EMO clearly knew where they should be. Unfortunately, it does not look like they knew how.

There were some things EMO did quite well:

Unfortunately, a number of other things went wrong:

Compared to previous years, the organizers of EMO had put in a lot more effort on their social media presence. With the exception of the mobile app, these were fumbling steps, but ones that I hope will be studied and learned from.

The shortcomings could be fixed with mostly minor effort, except perhaps for the lack of free WLAN, which is the most important issue. For the rest, more openness, more interaction, and more human touch could work wonders.

What about the exhibitors? Lack of free WLAN is obviously a huge hindrance, but from a group of over 2000 companies, one would expect to see some clever use of social media nonetheless.

EMO 2011 featured prominently on exhibitor news pages and other static web pages. Manufacturing industry is definitely on the internet, if not on social media, as there were loads of announcements from companies that they were going to attend EMO. It’s impossible to tell if every exhibitor posted at least a news article about EMO, but it sure looks to be close.

There was hardly any live content or content posted during the event. Perhaps the lack of free WLAN killed this. The official hashtag for the event, #EMO2011, was used by less than 200 people, almost all of them corporate accounts with logos for avatars, and most of the content was simply advertising.

Highlights of online and social media use from EMO 2011:

Unlike EMO, imX was an invite-only event, and thus significantly smaller with around 5000 visitors. It was held in Las Vegas on 12-14 September. However, judging by its online presence, you’d never know it was smaller than EMO.

imX website. The website was available in English only, but then again, the event itself was for companies operating in the United States. Like EMO, imX also featured a daily trade show newspaper, but the imX newspaper was an online epaper, which was, of course, much easier to read on the internet.

imX on social networking sites. imX featured a similar set of social networking sites as EMO, but the actual use of those sites was significantly different. They too had a closed LinkedIn group (which I’m not a fan of, but in this case it might be argued that it was because the event was invite only, and the group states to provide further details on the event program), and a mostly abandoned Youtube channel, but they also had very active Facebook page and Twitter account, both of which were used to promote the event in advance, share news appearances, and interact with followers.

imX got a bunch of things right:

There were nonetheless some things that could have been improved on:

It seems that the imX online presence was spread a bit too thin: they did a good job on Facebook and Twitter, but not so well on Youtube and their blog. I’m not sure which is the lesson learned here: should the number of channels be reduced, or should there be more effort on providing in-depth view of the event through blogging and videos.

imX also utilized a little bribery by drawing an iPad among the people who tweeted about manufacturing and used their hashtag, #imxevent, or posted on their wall on Facebook. I’m not sure if that did the trick, but the level of engagement was definitely higher than for EMO.

imX exhibitor and other participant presence in online and social media

The exhibitor with by far the most visibility on social media was Kennametal. The definite #1 of Twitter interaction in the manufacturing industry, Kennametal tweeted and interacted from multiple accounts, including personal ones, used their Facebook page, and livestreamed their learning labs events during the show.

None of the other exhibitors really left their mark in the social space. I did notice that Okuma, for example, released PDF files of their presentations afterwards, but there was no notable action online during the event itself.

Conclusions: state of social media use in the manufacturing industry

Manufacturing industry is still in very early stages of social media use: a couple of forerunners are experimenting with state-of-the-art solutions, but for the most part social media is not widely utilized, at least externally. It is difficult to assess whether blogs, wikis, or collaboration tools are being used internally at companies.

On the other hand, there are clear signs that social media is up and coming to this field as well: many companies have a presence on Twitter, LinkedIn, and Facebook, even if they don’t quite know what to do there yet. They just know that they should be there.

On blogging front, the IMTS trade show, for example, has a blog, and MMS Online recently started to recommend blogging for machine shops.

Video sharing, Youtube in particular, seems to be one of the most active outlets in the manufacturing industry. Perhaps this is to be expected: it is much easier to showcase machinery with videos than with text, and unlike with software, you can’t really give out demos of a machining center.

For a social media enthusiast, the actual use observed in EMO and imX is a little disappointing, but it looks like the social tide is seeping into manufacturing industry as well.

What about you? Do you have any good examples of social media use in the manufacturing industry, from these two trade shows or elsewhere? Or any further information on how successful the efforts of the forerunners have been?