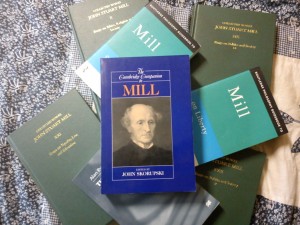 As the online world becomes even more deeply integrated into our everyday lives, everyone needs to think through what exactly they should be sharing online and where to draw the line.

I have been thinking about this issue by taking John Stuart Mill’s views on the freedom of speech and action as a basis. His famous harm principle, formulated in On Liberty (1859), argues that “the sole end for which mankind are warranted, individually or collectively, in interfering with the liberty of action of any of their number, is self-protection” (On Liberty, The Collected Works of John Stuart Mill (CW), volume XVIII, p. 223).The idea for this post came up when Stan Faryna directed me to a post by Stacey Herbert on what is too much information to share online. The majority of comments referred either to harming someone or to other consequences of sharing information. It seemed immediately obvious that the underlying philosophical base was teleological (i.e. interested in consequences) in nature, and furthermore, an application of the harm principle.

In order to see what tools this philosophy provides us with, let’s start with a brief examination of Mill’s argument.

The basic argument is that harm to others, in the meaning of perceptible damage, not mere dislike, is the only thing that society should prevent. Otherwise, individuals are to do as they please.

Acts are categorized to be either self-regarding or other-regarding, in which self-regarding acts are the “portion of a person’s life and conduct which affects only himself, or if it also affects others, only with their free, voluntary, and undeceived consent and participation” (On Liberty, CW XVIII, p. 225).

The type of effect is further clarified to mean direct effects only, as most actions can affect others through the original agent. These self-regarding acts are free from any coercion, whereas other-regarding acts can be rightfully prevented.

Freedom of speech is also generally categorized as self-regarding, as it is in practice almost inseparable from freedom of thought. (On Liberty, CW XVIII, p. 225-6)

Mill recognizes that this general principle cannot fully be applied to minors: “Those who are still in a state to require being taken care of by others, must be protected against their own actions as well as against external injury.” (On Liberty, CW XVIII, p. 224)

Conditions and manner of expression

Mill also recognizes that the conditions under which thoughts are expressed counts: Mill’s example is a claim that corn-dealers are starvers of the poor, which is fine printed in a paper, but not fine shouted in front of an angry mob (On Liberty, CW XVIII, p. 260).

However, when expressing an opinion does not cause such immediate harm, it can be expressed in any manner whatsoever, even if it is vulgar (On Liberty, CW XVIII, p. 258-9).

Thoughts that can be freely expressed may nonetheless have consequences, even though these consequences are not coercion.

What I contend for is, that the inconveniences which are strictly inseparable from the unfavourable judgement of others, are the only ones to which a person should ever be subjected for that portion of his conduct and character which concerns his own good, but which does not affect the interests of others in their relations with him. (On Liberty, CW XVIII, p. 278-9)

We have a right, also, in various ways, to act upon our unfavourable opinion of any one, not to the oppression of his individuality, but in the exercise of ours. We are not bound, for example, to seek his society; we have a right to avoid it (though not to parade the avoidance), for we have a right to choose the society most acceptable to us. (On Liberty, CW XVIII, p. 278)

These natural penalties are not part of the domain of liberty, but instead an unavoidable result of the plurality of opinions and preferences.

Everything that is published on the internet is instantly and permanently available. There was no media like this in Mill’s time, but his ideas are nonetheless applicable in the present day.

There are two considerations on what you should not share on moral grounds in a Millian framework:

Do not share material that causes direct harm to others. There is no angry mob at a blogger’s beck and call, but there are still limits on what you should reveal about others. Considering the reach and permanency of online sharing, the information you should share online is less than what you could express in a private letter or conversation.

Pay special attention to the protection of minors. I cannot stress the importance of this too much, and I think this applies to everything online. It is important to be extra careful about what you share about children.

In a Millian framework, these are the only moral restrictions on sharing. However, that does not mean that doing anything that is allowed should be encouraged.

Mill recognized that some consequences of voicing your opinions are inevitable as they are the result of different personalities and preferences. People may avoid you or speak ill of you if they disagree with your values. Add to this that what you share online may stay on the internet forever, and this becomes a fairly big question.

Before sharing something that you think is not in accordance with popular opinion, consider whether you can face the consequences.

Sure, you can share a lot of things and in a lot of ways, but there will be consequences, and it is important to think them through before sharing. In many cases though, the ones who will avoid you or speak ill of you after sharing something may not be the people you would like to hang around with anyway.

You may also be able to make unconventional thoughts or expressions part of your online persona, something that will be expected of you.

Mill was not particularly concerned with privacy, although he did point out that we should not parade our avoidance of someone.

However, there are important considerations that this framework does not yet encompass: avoiding harm to yourself from revealing too much to unscrupulous people.

Do not share information that can be used to harm yourself. This was not a relevant consideration in the 19th century with the communication tools available then. Nowadays, it is not smart to share things like your credit card number or your home address and times when you’re not at home. There is no moral obligation to withhold this information, it is merely prudent.

Summary of the Millian framework for deciding what to share online

The numerous references to similar values elsewhere indicate that some elements of this kind of framework are already implicitly applied by many people. By making this thought process more explicit, I hope to clarify the issue even further.

As a final point, I would like to stress that while applying this framework takes popular opinion into account, it is by no means its purpose to make everyone act the same.

“In proportion to the development of his individuality, each person becomes more valuable to himself, and is therefore capable of being more valuable to others.” (On Liberty, CW XVIII, p. 266)